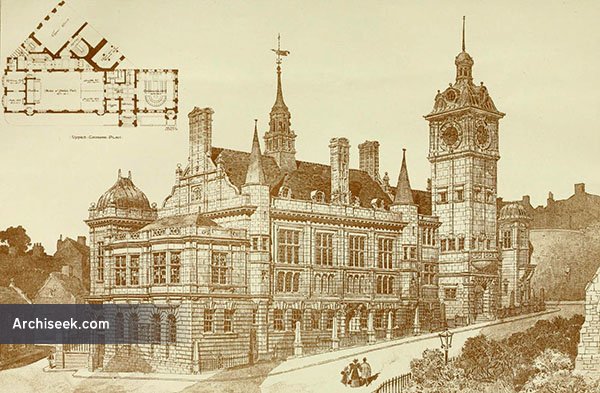 “This design was submitted in the early part of last year by Mr. Arthur Ardron, F.R.I.B.A., of 8, Delahay-street, Westminster. Nothing has transpired as to the decision of the promoters, although rumour has it that a second competition is to be undertaken. The principal floor is on the level of the floor of the present Upper Court in St. James’s-street. Owing to the considerable fall of ground from the new street to the lower end of St. James’s-street, the entrance to States of Assembly Hall is placed at the lower level, and would be approached by a flight of steps leading into a spacious vestibule or hall, but of this hall are the cloak-rooms for ladies and gentlemen, to be available more particularly when the assembly hall is used for public meetings, &c. This hall is capable of seating 400 persons, exclusive of the gallery. A rostrum is provided at the eastern end, and behind this, fronting the street, is placed the president’s retiring room, with ante-room adjoining. At the opposite end of the large hall provision would be made for forming two committee- rooms by means of movable partitions, as shown by the plan. Communication is given to the present upper court from the corridor, and convenient of access for each floor. A gallery capable of seating about 100 persons is provided. This is placed over the committee- rooms, approached by a wide staircase and corridor. An additional approach and exit is provided from the staircase opposite the St. James-street entrance, and separate lavatory accommodation is provided for ladies and for gentlemen. The hall for the States of Deliberation is placed at the corner of St. James’s-street and the New-street, and is designed to give ample seating accommodation for the 50 members. The approach is by a flight of steps in the tower over entrance leading into wide vestibule and inner hall, &c. A lavatory and cloakroom is provided on the same floor, with additional accommodation on the floor above. A large committee-room is shown on the first floor. This room would also be available as a supper-room when required. A small gallery for the use of the public to this hall is provided at one end of the hall, approached from St. James’s- street by a stone staircase. On the basement floor provision is made for two sets of offices with separate approach from St. James’s-street. These could lie let off to solicitors or others without in any way interfering with the public buildings. The caretaker’s house is in the basement, under Deliberation hall, and contains parlour, kitchen, scullery, and three bedrooms.

The design of the building externally is Italian Renaissance freely treated. The tower is placed over the main entrance in St. James’s-street at the highest level of site, so as to be made as conspicuous as possible without entailing extravagant expenditure. A four-way dial clock is shown, and also a small projecting balcony over principal entrance, which could be used for speaking purposes when the elections take place. The buildings would be faced entirely in granite, the mouldings, etc., would be kept as plain as possible in detail. Grey granite to be used for the dressings, and red and blue granite for the general facings ; the roofs to be covered with red tiles. The cost of the building was limited to £15,000.” Published in The Building News, April 8 1898.