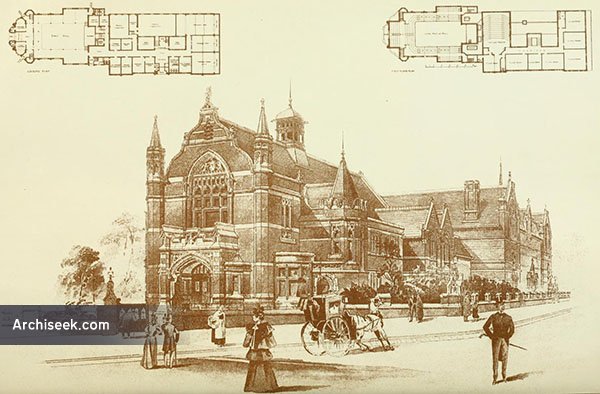 “These buildings are an extensive range erected by the Town Council of West Hartlepool for mechanical science and art instruction, and are an attempt to give a large amount of accommodation at a minimum of expenditure, the contract having been let for £11,330 to Mr. Thos. Dickinson, of Middlesbrough, by whom the buildings have been erected, the cost per cube of contents not reaching the sum of 4d. per foot as measured in the ordinary way. The buildings have been extended beyond the accommodation provided by the competition plans, and as they occupy in length the whole site from front to back, the plan had to be accommodated to the awkward angle formed by the building-line of the Hart-road front with the square of the side streets, and seating having to be provided for 1,400 people in the large hall to this front, it necessitated every inch of space being utilised to the best advantage. The several fronts are faced with the best Accrington red pressed bricks with dressings of Hunhouse stone. Inside the walls are plastered and distempered suitable tints.

All the halls, vestibules, and corridors, with lavatories, &c., on each floor, are of fireproof construction, and paved with marble mosaic to former, and granolithic cement paving, with border in colour, to latter items. The staircases are of hard York stone, with spandrel soffits, and the floors of classroom, lavatory, &c. , of wood- block construction, and all the fittings internally are specially designed to be in character with the building, while keeping in view the required limitation of cost. The whole of the ranges are heated by hot-water pipes on the low-pressure system, with radiators and air-valves of the latest pattern. The drawing from which this view is taken is a hurried sketch in colour by the architect to explain the general idea of the block of buildings to the committee, made by their desire at a day or two’s notice from, immature plans, be ‘fore the working drawing were elaborated ; but it shows the scheme generally as carried out, and from lack of time is all that is available. Mr. H.A. Cheers is the architect. ” Published in The Building News, February 11, 1898.