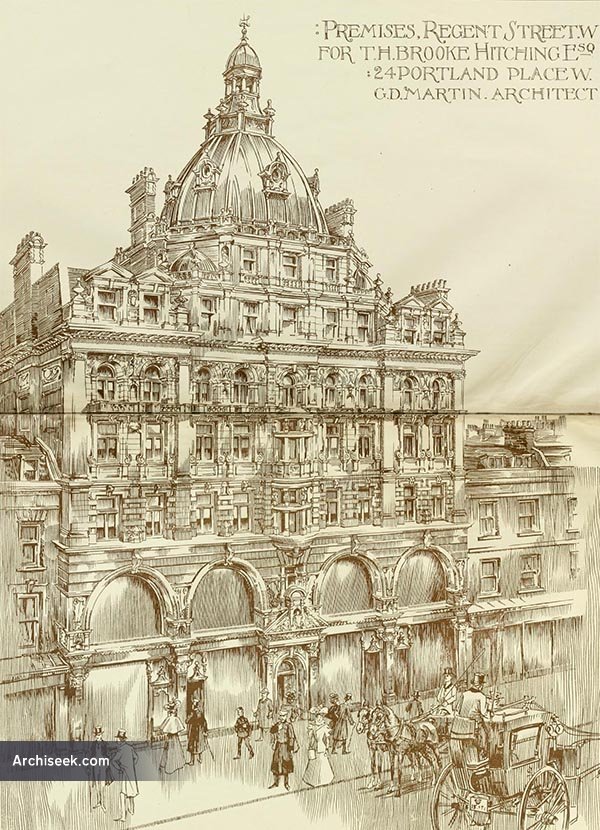 The block occupies the site of the former Hanover Chapel. Now known as Regent House, the central domed block, was designed by G D Martin for T H Brooke-Hitchings. The façade is decorated with Ionic pilasters in contrast to the restrained adjoining buildings by A.J. Davis. The distinctive mosaics in the spandrels were installed to advertise an early tenant, Dr Salviati, who designed and manufactured mosaics. He was one of the principals responsible for the rebirth of Venetian glass after its nadir under the Austrian rule of Venice, and had British partners and a London shop. Amongst his better known works was the restoration of the mosaics in the Basilica San Marco in Venice, and the mosaics on the Albert Memorial in Hyde Park, London. Salviati also worked on some of the mosaics for St. Paul’s Cathedral, London. The designs on the façade were restored in 1999, and show: the arms of the City of London, a British Royal Lion holding the Royal Arms of the United Kingdom, the arms of the City of Westminster.

“The building now in course of erection on the Hanover Chapel site. Regent-street, for Mr. T. H. Brooke-Hitching, from the designs of Mr. G. D. Martin, architect, 3, Pall Mall East, S.W., will consist of nine floors, inclusive of basement and sub-basement, the whole surmounted by a bold dome of polygonal form covered with copper, containing large room lighted by eight projecting louvres, the dome being terminated by an open cupola. The ground floor will be divided into four handsome shops with central entrance to upper floors, separated by red Aberdeen granite pilasters, and in the rear of shops there will be a large hall or show-room. The mezzanine floor, consisting of show-rooms to main cornice, will be executed in red terracotta, while the five upper floors will be carried out in Portland stone of bold treatment, and will comprise about 64 well-lighted offices, lavatories, &c., approached by grand staircase and hydraulic elevator. The whole of the floors and partitions will be of fire- proof construction.” Published in The Building News, January 7 1898.