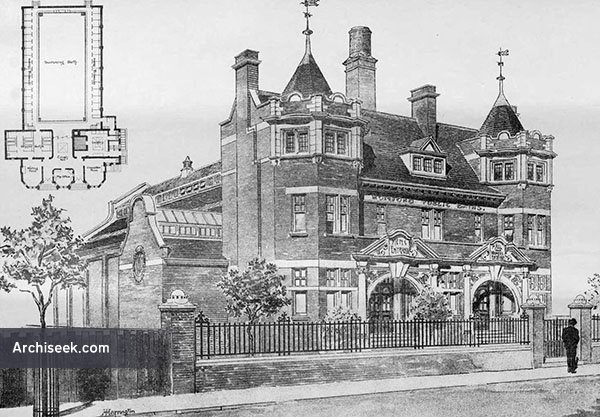 Harry Harrington and Algernon Sydney Richard Ley practised in partnership in London from 1896 to 1906. “This design was recently selected in competition for new baths by the urban district council of Romford. The building is to be erected in Mawneys-road, and the plan and view show the arrangement and appearance. Double entrances are placed in the front for men and women, and also for providing sufficient means of entrance and exit when the bath is used as a hall. The boiler-house is in the basement under laundry, and the rooms on upper floors of front block are to be devoted to classrooms and caretaker’s residence. The fronts to Mawneys-road will be faced with red bricks and Bath stone dressings, and the roof covered with green slates. The buildings in rear will be finished in a simple and inexpensive manner. The water for the baths will be obtained from a well sunk on the site. The architects are Messrs. Harrington and Ley, of 108, Fenehurch-street, E.C.” Published in The Building News, July 29 1898.