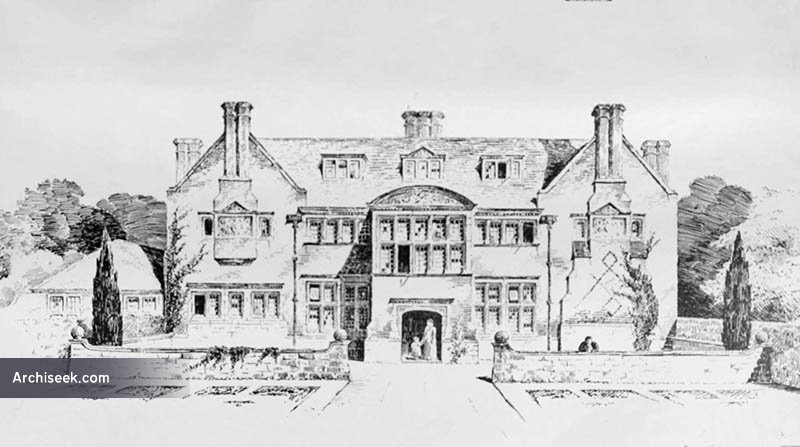 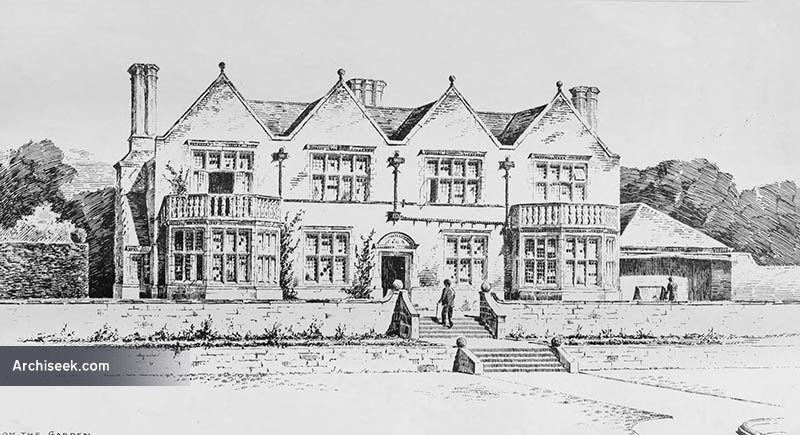 Houghton Grange has lain empty for over 25 years since the poultry research business who used it for decades along with rest of the estate closed. It is now in a bad way due to neglect and vandalism. There are two horrific 1960’s laborotory extensions either side of the main house.

“Houghton Grange, now in course of completion for Mr. Harold Coote, is situated upon Houghton Hill, a few miles from Huntingdon, and commands an extensive view of the surrounding country. It is approached from the main road by a long straight avenue of limes on the north side, while to the south are the terraces, gardens, and lawn, leading down to the River Ouse. The house stands upon a roughly hammer-dressed base of Weldon stone, and has mullions and dressings of the same material, of which the carving has been executed by Mr. Henry Price, of Kensington. The walls are of red brick, and the roof hung with old green tiles. The plan is a plain parallelogram, whose only excrescences are the bay windows and chimneys, and, in addition to the accommodation shown, there are four bedrooms and a box-room on the second floor. The hall and drawing-room are panelled in oak, the former having above the panelling a frieze of red brickwork and an oak-framed ceiling. The rooms on the first floor are low, with the exception of the four principal bedrooms, which have barrel ceilings in the gables. A lodge has been built at the drive gates, and some of the old farm buildings are in process of conversion into stables. The drawing which we illustrate was shown at the Royal Academy this year. The architect is Mr. James Ransome, of London.” Published in The Building News, December 9 1898.