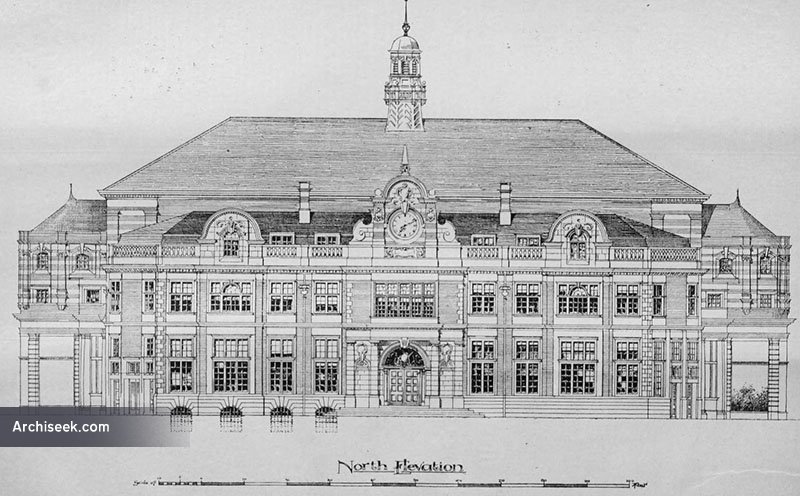 “This design was recently submitted, by Mr. R. Knill Freeman, architect, Bolton, in a limited competition for this work, and the proposed arrangements of the several departments, as required by the conditions, are clearly shown on the plan, etc. The ground-floor provides for a spacious market with entrances at each end, and for ten shops, if required, on the south side, special attention having been paid to the lighting and ventilation. Three entrances and staircases are provided, viz., one at each end of building and the main entrance hall and grand staircase, the latter being placed in the centre of the north facade. On the left of the hall, on the ground floor, is placed the Guildhall, with separate entrance, lavatory, and w.c, a suite of offices in connection with this department also being provided in basement conveniently approached. Lavatory and other accommodation isalso provided in basement. On the right of the hall are placed the refreshment-room and offices as required. The assembly hall, to seat 1,000, is placed on the first floor, and is arranged to be used for theatricals when required.

Ample entrances and exits are provided, and at one end is placed a large stage with wings, 31ft, by 25ft. , and other necessary arrangements for theatricals, also actors and actresses’ dressingrooms. At the opposite end of the assemblyroom is placed a gallerv, while on the north side a balcony is provided with ornamental bays between the arcading, and a ceiling light going the full length. On the first floor are also provided ladies’ cloak and retiring rooms, supper and ante-rooms, and other accommodation, the gentlemen’s cloak and retiring rooms being placed on a mezzanine floor, approached from the staircase landing. The main landing to the grand staircase is arranged to serve as a foyer and refreshmentbuffet. A property lift, in connection with the stage, is provided, and other lifts where required. On the second floor are provided smoking and card room?, caretakers rooms, kitchens, &c., in addition to the gallery and balcony previously mentioned, and all conveniently approached. The style adopted for the building is Late English Renaissance, and the materials proposed to be used for the exterior were red bricks, with stone dressings, the roofs to be tiled.” Published in The Building News, September 16 1898.