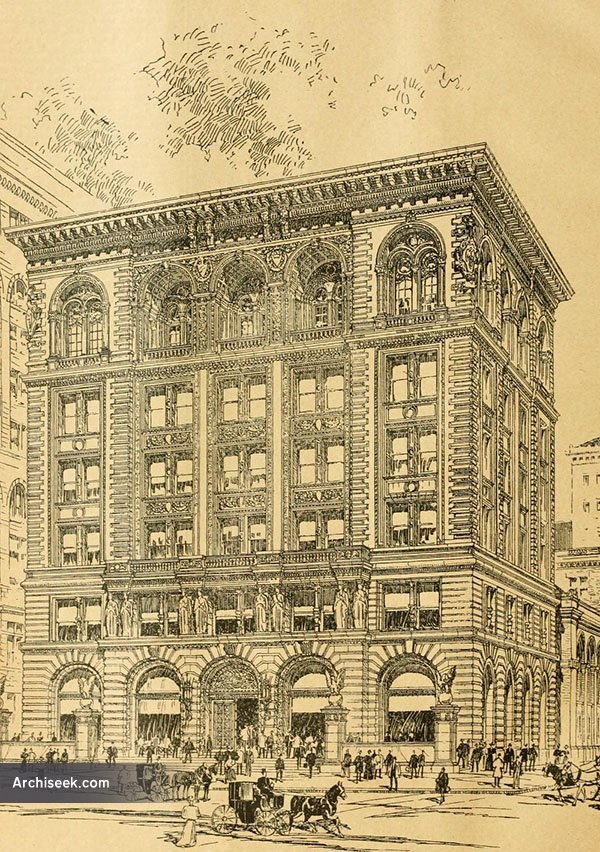 “AMONG the many clever buildings erected during the past twenty years in America, few have surpassed in merit those designed by Messrs. Peabody & Stearns, the well-known architects, of Boston. To-day we give a view of one of their very recent city buildings — the Chamber of Commerce, Cleveland. The difficulty of investing a facade like this with distinguishing character is a very real one when floor upon floor, each of about the same height, has to be provided for. The fenestration necessarily has to follow very nearly the same lines as the apartments within, and the variety of treatment which follows upon a diversity of internal arrangement is wanting in such edifices as hotels and apartment houses or office buildings. The architects in the instance now illustrated have very ingeniously over- come the inevitable monotony so frequently observable in elevations where the conditions of several floors are similar, and Messrs, Pea- body and Stearns have inspired their facades with breadth and dignity by pleasingly contrasting the strongly-marked horizontal lines of the base with the vertical lines of the main portion of the fronts. These, again, are crowned by a boldly -managed cornice. The loggia of the top story, it is true, was rendered possible by the increased height of that floor, and thereby great advantage, of course, is obtained, an advantage which would have been lost had the upper part of the building been devoted to small apartments. The sculpture fronting the mezzanine floor is a distinct acquisition, and although there may be nothing, after all, very specially original in the detail of this building, its design is at once modern and architectural in style, its effect being obtained without following any exact period or recognised historical mode. Its parts are somewhat elaborate, notwithstanding the simplicity of its general outlines, and we intend to illustrate a sheet of of its details because of their merit, which we have thus endeavoured to indicate. The American Architect to whom we are indebted for this view, has on more than one occasion enabled us to become acquainted with works by the same architects.” Published in The Building News, June 10 1898. Demolished 1955.