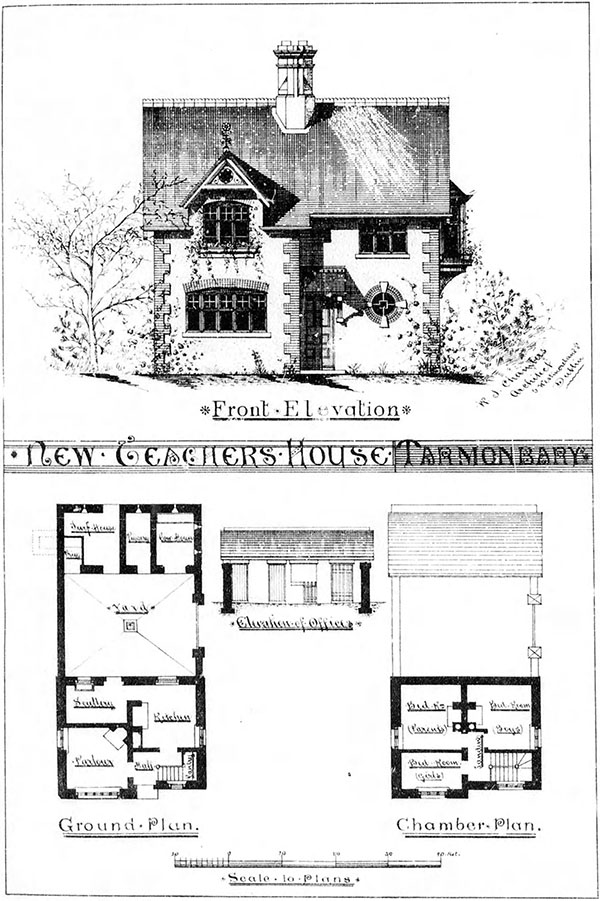 Tarmonbarry, officially Termonbarry is amsll village on the Roscommon Longford border, split by the River Shannon. William Chambers was an English architect who had settled in Dublin by the end of 1879. During this period he was also engaged in various projects in and around Dundalk Co. Louth, some speculative. In September 1883 he announced in the Dundalk Democrat that as he was ‘now specially engaged in developing the building resources of the Dundalk estate’, and ‘to inform his clients and the public generally that he will attend at his office in the markethouse, Dundalk, every Wednesday’. Chambers left Ireland around 1885 and continued to practice as an architect in England.

“Our illustration represents a teacher’s residence (in connection with the National School) in course of erection at Tarmonbary, beautifully situate on the banks of the Shannon, near Longford. It is being built by the landlord, the Rev. Sir William Ross Mahon. It is the first of a number about to be erected in this district by the same architect. This picturesque little village is making headway; a large and handsome new police barracks adjoining is also in course of erection from designs by the same architects, and other buildings are in contemplation. Mr. Patrick Kelly, builder, of Longford is the contractor in both cases, and Mr. W.I. Chambers of Dublin is the architect whose pen-and-ink sketch we here reproduce. We understand that the bay window shown in the elevation was omitted in the building owing to its retention increasing the contract above the stipulated sum; it is, therefore, being built as shown on the plans.” The Irish Builder, February 1 1882.