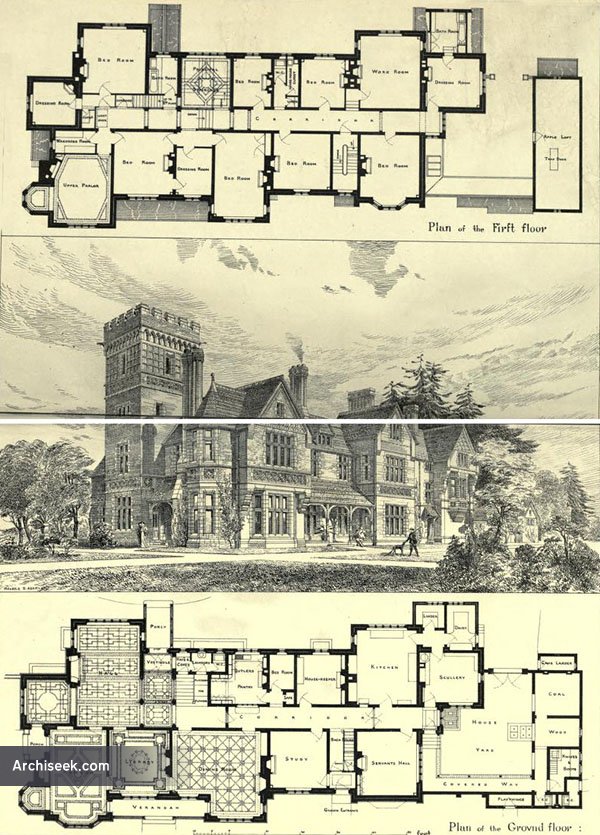 “We give this week illustrations of a house, at present in course of construction by Mr. A. Waterhouse, A.R.A., for his own residence. It is situated at Yattendon, a small village about ten miles to the west tif Reading, in a district interesting alike from the beauty of its scenery and its historical associations. At the east end of the village there rises a hill of meadow-land, skirted by picturesque woods, on the summit of which, some 450ft. above the sea level, stands a clump of tall and weather-beaten silver firs, which serve as a landmark for miles around. The house is placed under the shadow of these firs, and is approached through a wood, by a drive which leads to the open (oak) porch on its north side. The arrangements of the interior will be sufficiently explained by the plans of the chief floors, which we give herewith. The principal staircase, with a double arcaded screen at its head, is of oak; so are the fittings. of the hall. The woodwork of the library, which is surrounded with shelves for books and drawings to the height of about- 8ft., is of American walnut ; that of the dining-room, of a combination of walnut, mahogany, and ebony. The wood- work of the parlour, and that of the “Upper Parlour” or boudoir, is painted ; the rest of the house is of varnished pitch-pine. The fireplaces, some of which are commodious and furnished with seats, are of the simplest form, lined with glazed fireclay and tiles ; the fires, either of coal or wood, being made on the hearth, without the use of any sort of grate. The external walls are hollow, bonded with Jennings’s patent glazed terra-cotta ties, and faced with red bricks of an excellent colour, made on the spot, with a considerable admixture of buff terra-cotta. The roof is covered with red Ruabon tiles. The upper part of the tower on the west side of the house is occupied by a large cistern, intended for use in case of fire. From the lead flat above the cistern, an extent of view is obtained probably unequalled in this part of Berkshire. On the north stretch the Compton Downs. On the east one sees the valley of the Kennett, toward* Reading, the town itself hidden by the hills dividing this river from the Thames, while beyond are two hills, S.W. of Windsor. It is even reported among the villagers, that the Royal Castle itself (distant 25 miles) could be seen be- fore the growth of the woods obstructed the view. But it is on the south that the prospect is most varied and extensive. About a mile off rise the wooded slopes of Frilsham, with undulating-cem-fields in the foreground. On the left, the land slopes to the little river Pang, where it flows through Stanford Dingley on its way to the Thames. On the right rises the dark ridge of Cold Ash Common and Grimsbury Castle, while beyond are the blue hills of Hampshire, above Kingsclerc and Highclere, terminating abruptly at Walbury Beacon, nearly 1,000ft. high. In making the excavations for the house, the remains of a beacon were brought to light. The interest of the site was further increased by the discovery, about the same time, of a remarkable hoard of bronze implements, which were exhibited and described to a meeting of the Society of Antiquaries by Mr. J. Evans, V.P., 5th Dec, 1878.” Published in The Building News, January 7, 1881