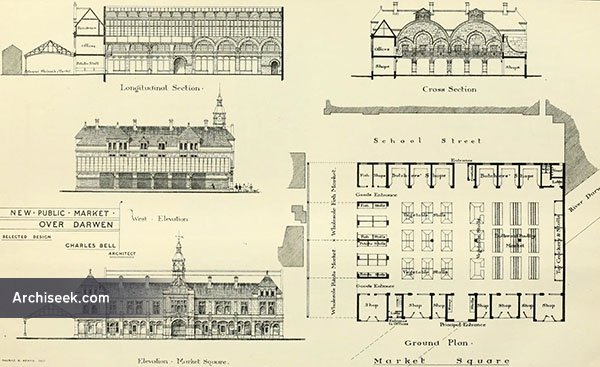 As part of a civic plan to develop the town, a competition was held to design a new town hall and market. It was later decided to defer the building of a town hall indefinitely and provide accommodation in the new market hall for the town’s officials. The Market Hall was opened on 11 July 1882 and the clock tower was added in 1899.

“The market is placed on the opposite side of the site, thus obtaining a market-square between it and the Town-hall. The central area is roofed by a double span semicircular gh-der roof, glazed on the north side only. Shops for butchers and general purposes are arranged on each side, the former opening into the market only. A vegetable and fish market spaces are provided at the west end, with low-pitched roofs to avoid interfering with the ancient lights adjoining. Above the shops arc provided suites of offices reached by a staircase and projecting gallery on the market side. The general design is made to agree with that of the Town-hall. The estimated cost of the Town-hall is £35,000 and the market £1.3,000. The architect is Mr. Charles Bell, 4, Union- Court, Old Broad-street, London, B.C.” Published in The Building News, October 24, 1879.