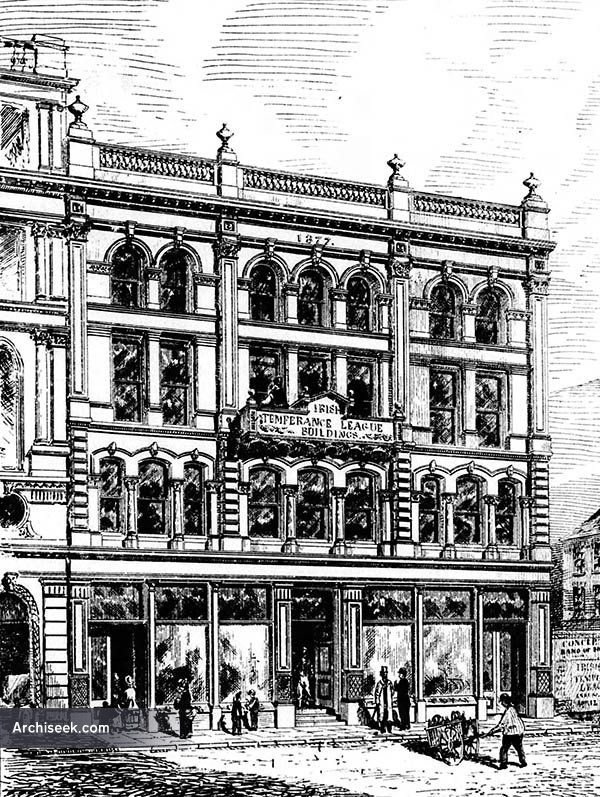 4-storey, 3-bay, stucco building constructed to house a temperance café which operated until 1966. The architect Joseph C. Marsh was a Quaker working in Belfast who was hired by the Irish Temperance League to design coffee stands across the city. Published in The Irish Builder, April 1 1877. Demolished in 1991.

“The new building recently commenced inLombard-street is intended as the head quarters of this now powerful organisation. Only a few years since it occupied a single back office in a neighbouring street, but its operations have latterly become so extensive that the executive determined to rear a structure for themselves adequate to their increased requirements. They are also embracing the opportunity of establishing a Temperance cafe, which will vie in the completeness of its appointments with those already established in several large cities. The frontage to Lombard-street measures 48 ft., with a rere of 56 ft., and height to top of parapet of 58 ft. The entrance to upper floors is in the centre, with a shop for letting on the side not occupied by the cafi. On the first floor there will be two large offices, and the assembly room, which seats about 200. The central staircase, which is of oak, and 5 ft. 6 in. wide, divides into two wings as it approaches the first floor. One of them leads to the body of the assembly room, gallery, &c, and the other to the platform, anteroom, and front seats. The offices to be occupied by the League are situated on the second floor, and are 26 ft. by 26 ft., with a storeroom in addition. On the third floor there is a room 21 ft. by 12 ft. 6 in., in which the preparation of the various delicacies required in the establishment below will be carried on. On this floor is a caretaker’s dwelling, consisting of three apartments.

The scullery opens out to a flat concrete roof which serves as a yard, although at a height of 40 ft. from the ground. The front will be of Portland cement, with columns on the first floor of polished granite 7 in. diameter, from the Bessbrook Quarries. The surbases of front pilasters are proposed to be of Minton’s encaustic tiles, set in iron frames. The front of the projecting balcony will contain the name of tho building, cut in slate, and gilded.

The estimated outlay is about .£3,500, raised by debentures ; and the building is being erected by Mr. Thomas McArthur, from the designs and under the superintendence of Mr. Joseph C. Marsh, architect. The Irish Temperance League is also engaged in erecting coffee-stands in various parts of the town, from designs by the same architect.”