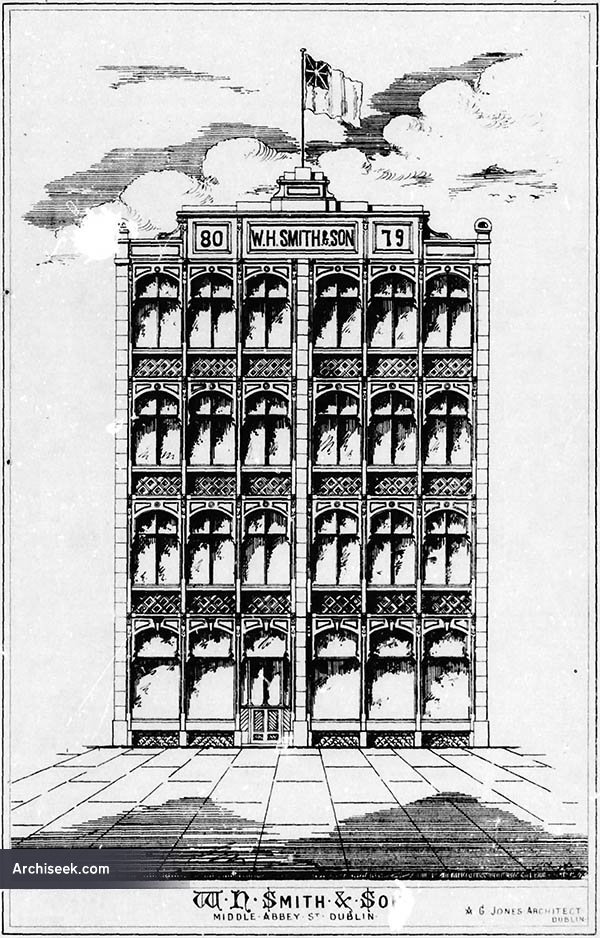 Built at Nos. 79-80 Middle Abbey Street for W.H. Smith whose assets and business in Ireland was eventually taken over by Charles Eason and Son in 1886. Probably a unique building for Dublin, it was sadly destroyed in the Easter Rising.

“No.80 is now approaching completion and show what will be repeated in duplicate when 70 is complete. The design is by Mr. Alfred G. Jones and exhibits novel and marked architectural features of picturesque character, unusual in buildings devoted to mercantile pursuit. The works are entrusted to the builder of the firm, Mr. William Hughes.

The facade is composes of piers of Dalkey granite with intermediate supports formed by cast-iron pilasters of exceedingly light and graceful outlines. No brick has been used in this portion of the works, if we except the upper panelling or corona, which is built of brick and moulded in Portland cement with dressing and cappings of Dalkey granite. The interspaces under window opes are filled in with Portland cement concrete in lozenge-shaped ornamentation. The windows are all casement sashes with segmental curtained heads, to be glazed with plate glass.

The interior construction consists of piers of chamfered white firebrick built in Portland cement, upon which the girders, formed with I-shaped rolled iron flitches, encased in beams of memel timber, supporting the different floors rest” The Irish Builder, July 1 1875.