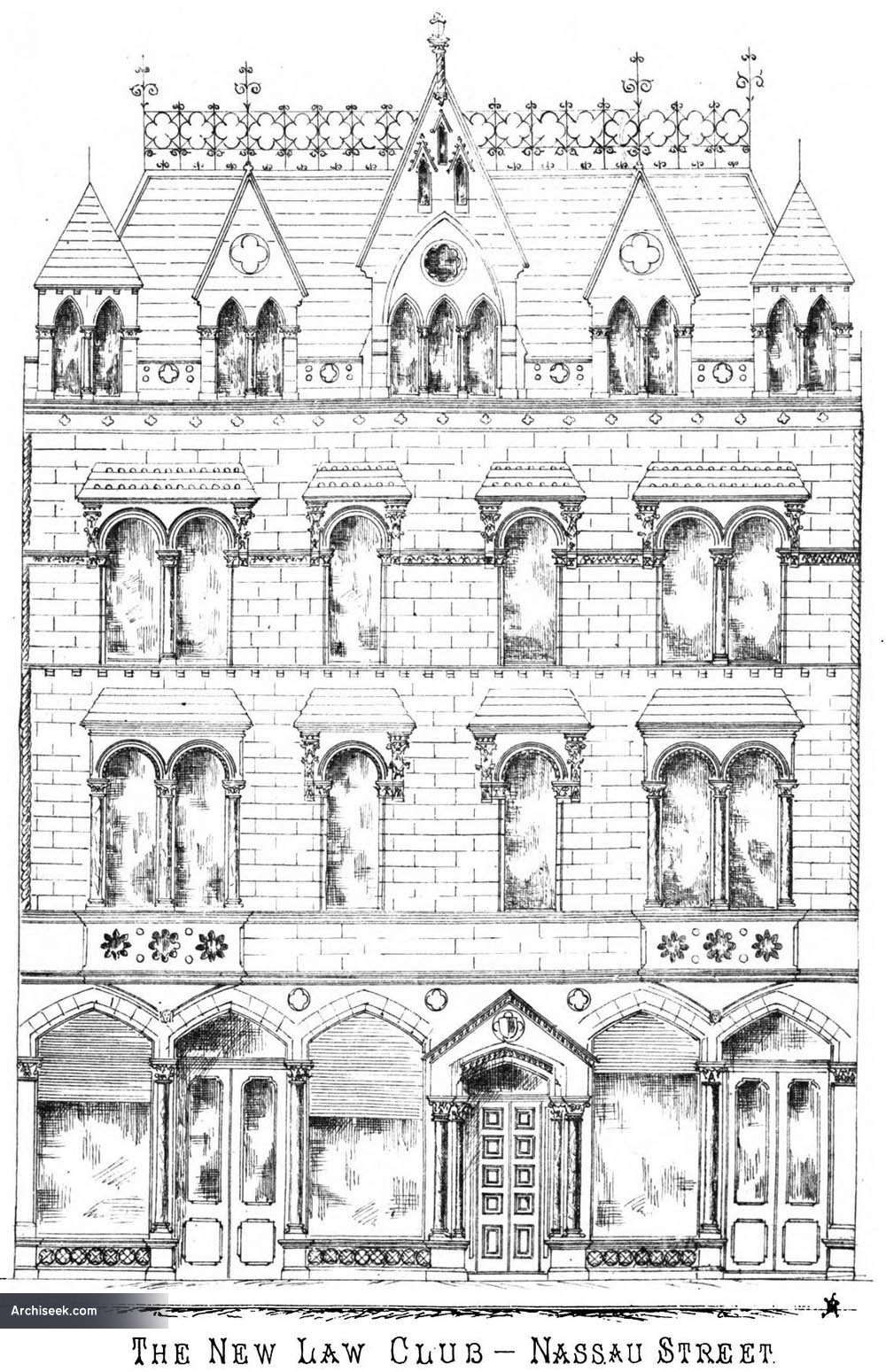 Gothic club building with two oriel windows at first floor level allowing the members to have a few of the street from their smoking and coffee rooms. Designed by John McCurdy with work supervised by William M. Mitchell, who later became his partner. Demolished in the 1960s to make way for poor office building. A sad loss to Nassau Street.

“THE new dwelling for the Law Club—one of the oldest in our city—has been completed and occupied. It is situated in a central and convenient position on the south side of Nassau-street, close to its junction with Grafton-street. The street elevation is Gothic in its character, freely treated, and consists of four storeys, marked externally by moulded and carved string-courses. The second floor is divided into six bays, spanned by segmental pointed arches, surbased. The division forming the entrance to the club house is distinguished by a projecting porch, flanked on each side by polished Connemara marble shafts, with carved capitals and bases.

The two oriels on the first floor (belonging respectively to the coffee-room and reading room) form a striking feature on the façade, and afford an admirable prospect over the College grounds. These oriels are carried on carved stone corbelling springing from ground-floor arches, and consist each of two lights, divided and flanked by polished Peter head granite columns, with carved capitals and bases. . The pedestals are pierced by foiled circular openings, and the whole is covered by a hipped roof of ornamental red roofing tiles laid in patterns. The tier of windows on the next storey is very similar to those just mentioned, but proportionately smaller. The top floor, which is an attic, is divided externally from the work below by a bold and effective cornice, and is lighted by large dormer windows, the centre—a triplet– with a single pointed arch, spanning the whole; the gable above, carried up at a steep pitch, forming a prominent feature in its composition. It is surrounded by a stone terminal ornament forming a shield, the tympanum below being filled in with arched niches. The roof is of high pitch, and covered with princess slating, the whole being crowned by an elaborate metal cresting, having standards at intervals, richly gilt. The internal arrangements have been planned with great skill, and the utmost extent of accommodation has been obtained. The entrance-hall, which is enclosed by a handsome glazed screen in polished pitch pine, leads to the stairs, on the first landing of which is placed the bar, with lift and manager’s room in juxta-position.

A short flight of steps leads to the billiard room, a well-proportioned and well-ventilated apartment, lighted from the roof. The billiard-room is finished with all the necessary fittings, including a first-class billiard-table, by Harris, On the first floor is situated the coffee-room, an admirably-proportioned apartment 37 ft. by 24 ft., furnished with great elegance and good taste.

The reading-room and strangers’-room are also on this floor, the whole suite being 14 ft. in height. The second floor contains the strangers’-room, committee and smoking-rooms and members’ bed-rooms, also bath and dressing-rooms, with all necessary conveniences. The kitchen and the numerous offices in connection therewith are in the basement, which is roomy, ventilated, and well lighted. A large lift works from the top to the bottom of the house, for the conveyance of coal, &c., and doors are fixed at each stage. Lavatories and all other conveniences are provided throughout the house, and ladders of wrought-iron are fixed against the outer walls to facilitate escape in the event of fire. The internal decorations have been most successfully carried out by Mr. James Gibson, of Mary-street. The architect to the building is Mr. John M’Curdy, of Leinster-street; and the superintending architect on behalf of the club was Mr. W. M. Mitchell, of Suffolk-street. The works have been executed in a highly creditable manner by Mr. John Nolan, Meredyth-place.” The Irish Builder, March 1 1870