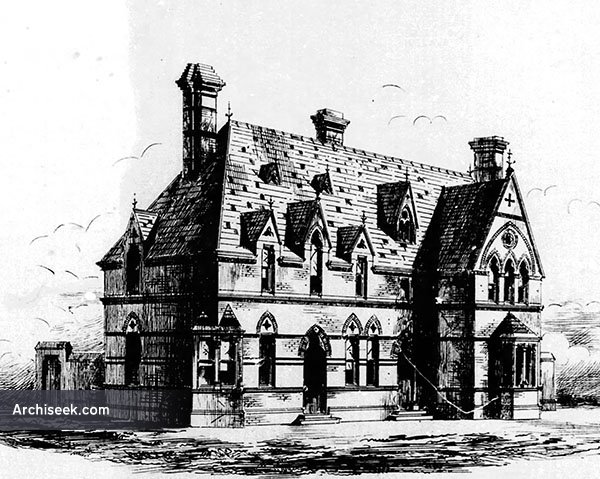 Strongly reminiscent of the work of Deane and Woodward of a decade before. “With this number we give an illustration of schools at present being erect at Carlow. They are the munificent gift of R. Clayton Browne, Esq., who also gave the site. These schools are designed to accommodate 150 children, and are divided into boys’, girls’, and infants’ schools, with apartments for master, mistress, and infants’ teachers. The school-rooms are each 27ft by 17ft. The infants’ and girls’ schools communicate with each other by means of folding doors, so as to form one large room for lectures, etc., when required. The entire building is elevated on a raised terrace two feet above the level of the street. There are separate entrances for the boys and for the girls and infants. A committee-room is provided on the upper floor. The building will be faced with granite, with bands of limestone, and red brick will be used freely in the door and window dressings. Mr. Joseph F. Lynch, of Carlow, is the contractor, under the superintendence of Mr. John McCurdy, Archtect.” Published in The Irish Builder, April 1 1867.