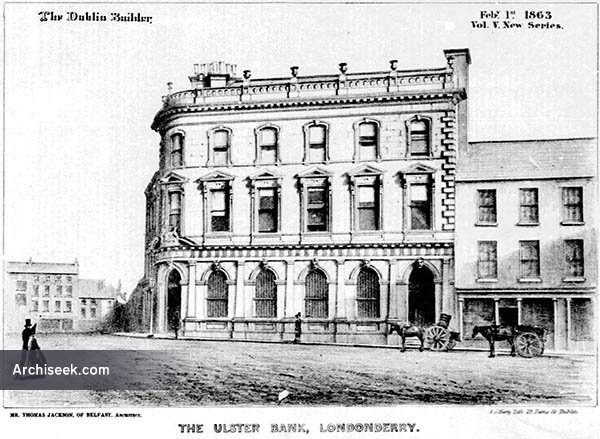 Fine Italianate bank building by Belfast architect Thomas Jackson. Jackson was architect to the Ulster Bank, and designed many branches but the design of the head office was given to Glasgow architect James Hamilton. Bombed and later demolished in 1975.

The Dublin Builder remarked on the building in a general piece on the city: “we come upon a block of buildings in the Italian style, at the intersection of two streets, reared some time since by the Ulster Banking Company, under the direction of Mr. Jackson, of Belfast, architect, to whose tasteful design, therefore, much merit Is due. For this, as well as various other works in the town and neighbourhood, Mr. McClelland, builder, who is also an extensive saw-mill proprietor, was the contractor. We hope the other Banking Companies who have branches here will follow the example of the enterprising ‘Ulster.’”

“Our present illustration shows an external view of a very neat structure, erected by the Ulster Banking Company in “the Maiden Citie,” and referred to in our general notice of Derry in April last. The site is particularly advantageous, the principal elevation facing a spacious and populous thoroughfare. A well-proportioned bow connects the front and flank, and the general design is a chaste and pleasing sample of the Italian style of architecture. Internally the arrangements embrace all the usual requirements of a bank. Mr. Thomas Jackson, of Belfast, was the architect, and Mr. McClelland, of Derry, the contractor, on both whom both the design and the execution of the work throughout reflect the highest credit.” Published in The Dublin Builder, February 1 1863.