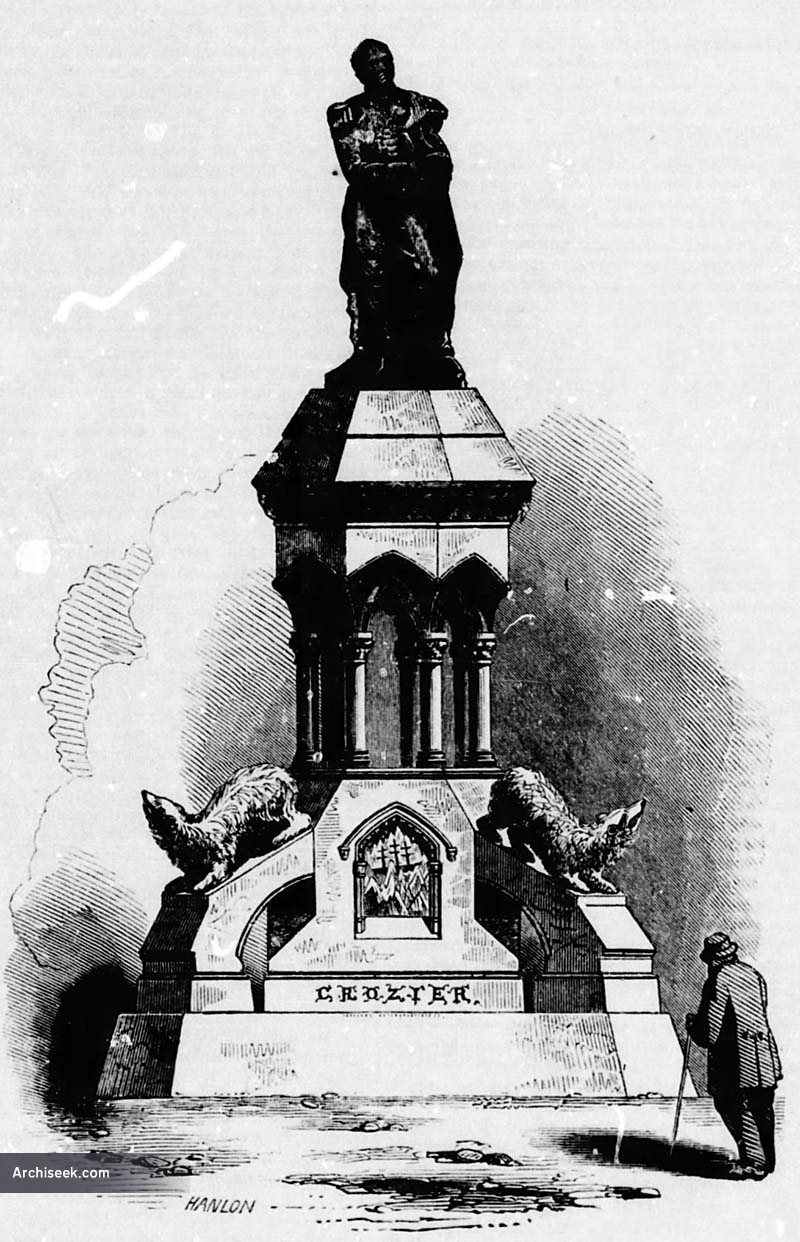 Crozier was a British naval officer who participated in six exploratory expeditions to the Arctic and Antarctic. He was born at Avonmore House which stands opposite his large memorial in Church Square, Banbridge. In 1845, he joined Sir John Franklin on the Northwest Passage expedition as captain of HMS Terror. After Franklin’s death in June 1847, he took command of the expedition, and his fate and that of the other expedition members remained a mystery until almost the present day.

THE design of Mr. W. J. Barre, of Belfast, architect, for the pedestal on which is to stand, in the town of Banbridge, the colossal statue of the late Captain Crozier, R.N., by Mr. Joseph R. Kirk, sculptor, has been selected as the best out of about fifty submitted in competition to the committee, and the following are particulars thereof:—The pedestal is designed after the English manner of the thirteenth century, and consists of a subplinth, base, shaft, and cornice. The sub plinth is 14 feet square, and 2 feet high, splayed about 6 inches. On the centre of the north side is carved, in mediaeval characters, the name Crozier. Upon the subplinth stands the base of the super structure, with the bases of the buttress piers radiating from the angles diagonally. Immediately from the base rises the die of the pedestal, which is here broached into octagonal form on plan, and is surrounded at four angles by flying buttresses rising out of the diagonal piers before named. Upon the arches and the part of the buttresses from which pinnacles usually rise (here cut horizontally) are placed four polar bears, carved, life size, and each intended to stand in a different posé. The shaft, which is octagonal, rises from the die to a height of 9 feet, and is surrounded by eight pillars placed at its angles, each with moulded base and capital carved in emblematical foliage. Above these pillars are eight arched and foiled ropes, with carved rope angles and bosses supporting the cornice, which will have carved monograms, anchors, heads of polar dogs and bears, and other emblematical illustrations of incident in Arctic voyages. Over the cornice is a weathered broach diminishing to an octagonal platform, 3 feet 9 inches in diameter, upon which is to stand the statue. The entire height of the pedestal is 17 feet, the height of the statue 7 feet 6 inches. The material will be, for sub plinth, Armagh limestone; columns round shaft, polished red granite, and the remainder of Glasgow sandstone.” The Irish Builder, January 15 1862.

“Our illustration for this number comprises a view of the memorial at present being erected by subscription, in Banbridge, to the late Captain Crozier, R.N., a native of the town. The committee instructed Mr. Joseph R. Kirk, R.H.A., to prepare a model of the figure, which being adopted, that eminent sculptor proceeded with the execution of the statue itself, which may still be seen at his studio in Jervis-street. For the pedestal, the design of Mr. W.J. Barre, of Belfast, architect, was selected from a number of others recently submitted in competition.” From The Irish Builder, April 15 1862