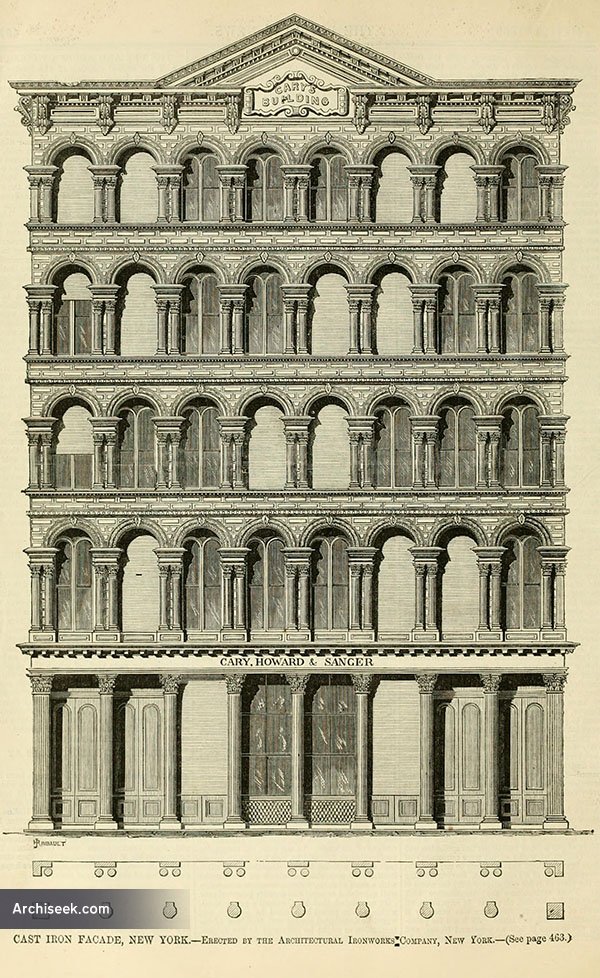 A double-facaded building which runs through the block between Chambers Street and Reade Street, and was among the first fully cast iron-fronted buildings in the world. The two ground-floor fronts are of large-paned windows and doors framed in slender cast-iron columns; paired columns separate the arcaded window bays of upper floors, with cast-iron rustication that was originally painted a creamy limestone color and the wet paint surfaces sanded the better to imitate stone. The effect was akin to a narrow slice of Venetian Renaissance palazzo. The cast-iron elements were produced by Daniel Badger’s Architectural Iron Works in Manhattan. Although built as a commercial structure, the Cary Building is now residential. As a result of the widening of Church Street in the 1920s, a 200-foot-long wall of unadorned brick is now exposed on the east side of the building. The building was designated a New York City landmark in 1982, and was listed on the U.S. National Register of Historic Places in 1983.

A piece in The Building News, seemed less that impressed that buildings could be constructed without architects, but seemed to welcome the process: “FOR many years past iron has been used for the fronts of buildings in America, and so large a demand exists that a company called the Architectural Iron Works Company of New York devotes its entire attention to the supply of iron buildings. As yet, however, no attempt has been made to do other than furnish masks, which are generally of lavishly ornamented design ; for ordinary buildings, iron as a material of construction is even less used in America than with us, and therefore no new principles have been evolved, such as might have been expected from people so ingenious in mechanism as the Americans. How best to use iron and steel in a large building is an interesting question, and one which the efforts of the Architectural Ironworks Company have as yet not attempted to touch.

So far, the iron buildings, so called, in America are but ordinary structures, with brick party and partition walls, and with plank floors and staircases, just as in any other erection, and the facade only is of cast and wrought iron, and this, loo, so often painted white in imitation of marble, or brown and sanded to resemble stone, that a passer-by would not at a first glance detect the material employed. As these fronts are composed of castings, fitted together and built up in accordance with the dimensions of the building, it may be supposed no very great variety of patterns can be afforded, and one building must in a great degree resemble another from the same foundry.

A practised eye soon detects this to be the case, and the use of such fronts is certainly not conducive either to the interests of art or to the employment of architects. There are some objections, too, to the employment of iron as used in America for the casing of a front, which should have especial . force in that country, the principal one being the danger to those who would help in case of a fire. It is well-known that firemen dread to encounter a fire in the interior of these metal shells, and that one once breaking out is but rarely mastered. But as the material permits plenty of very showy ornament, is quickly put in place, and is of very considerably less cost than marble or stone, it is largely used, and the danger of fire is chanced. One reason to recommend it is the facility with which it can be transported to localities where stone or marble are less easily obtained, and it is thoroughly in accordance with the spirit of American enterprise to be able to send of carefully packed fronts to all the growing towns and cities of the great West and South, to be fitted on to side walls that require neither the plans nor directions of an architect.

The same sets of patterns permit almost endless combinations, so that an appearance of diversity of design is obtained, which pleases the public eye and is good for trade. A fact should be noted, which is, that experience shows that iron-fronted buildings are not hotter in the blazing summer heat than those composed of any other mate- rials. This probably arises from the small quantity of material left after the glazed openings have been made, and also that as all American buildings are of very great depth, there is no necessity for near contact with the front.

The view presented of a cast iron facade in New York, with some enlarged details, gives a favourable specimen of such buildings, and exemplifies our remarks. The front is built up of thin plates, cast as ornamental panels and screwed on to the cills and uprights that form the framework ; each column is at the base bolted to a cill plate, and the tops are tied by an ornamental string-course, on which rest a second series of uprights, and so on to the top cornice of the entire facade The smaller ornamental features are screwed on in their places, and the window and door architraves, mouldings, and such other architectural features, are cast upon panels that are fitted in between the framework of the front. The introduction of this mode of constructing a front has led to the invention of all sorts of fantastio capitals, and other ornamental features, and it some curious combinations are to be seen of details nowise allied, the general effect seems to please, and criticism, so far as we can learn, is silent. Probably before long a legitimate use of iron for the entire construction of a building will be attempted, and in this hope we shall watch kindly and with much attention the efforts of our American friends.”