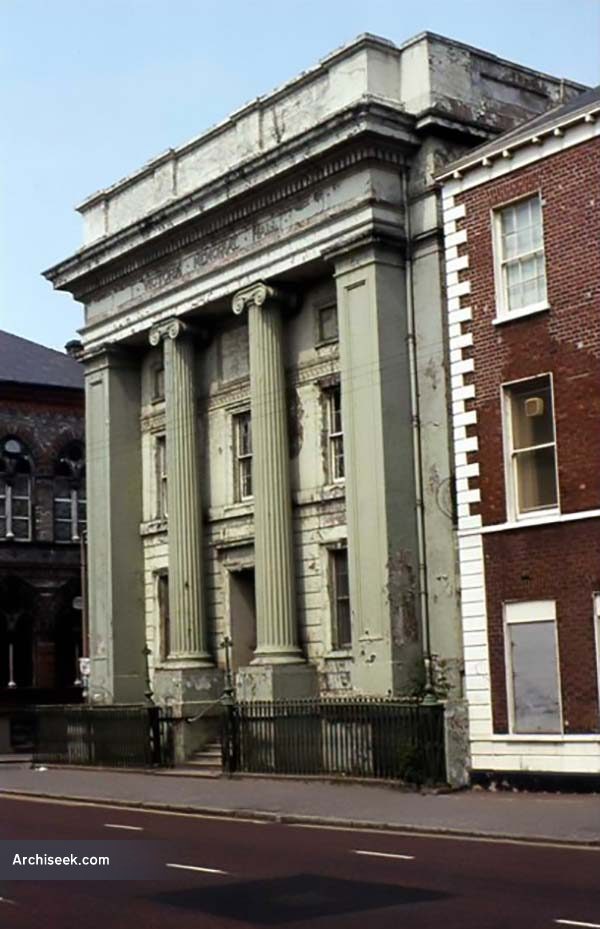 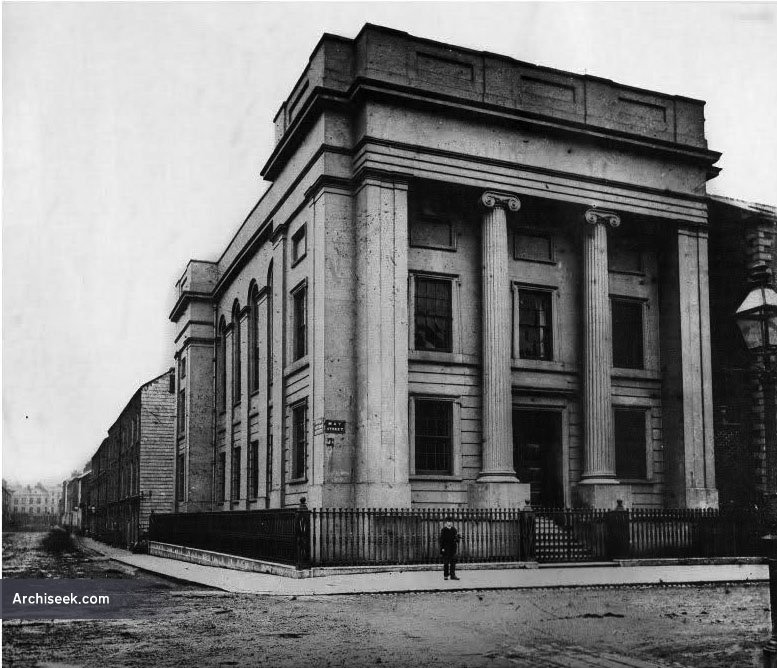 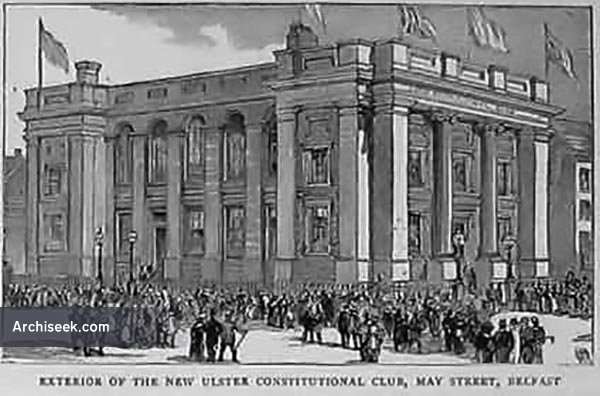 Constructed as the Victoria Music Hall, later the Church of Ireland YMCA in 1882, and later becoming a Gospel Hall for the Plymouth Brethern around 1916. For a few years in the early 1880s, it was the home of the Ulster Constitutional Club. After lying derelict for many years, it was demolished in 1983 and replaced with a poor office development.

“On Tuesday, a meeting of the members of the Anacreontic Society, and shareholders in the New Music Hall, was held in that building, for the purpose of receiving a report and statement of accounts from the building committee, and determining on the time and manner of opening the Hall to the public.

Before the meeting commenced we had an opportunity of going through the building, and\ were much struck by the evidence of taste and public spirit which it presented. The music room is particularly deserving of admiration. It is a splendid apartment; and we believe we are correct in stating, that it is decidedly superior to any of the kind in Ireland, and is surpassed by very few in the sister country. The building is an ornament to the town, and reflects great credit upon the spirit and enterprise of those gentlemen who have been chiefly instrumental in promoting its erection.

Before proceeding to what took place at the meeting, it may be satisfactory that we should state the dimensions, &c. of this important addition to the public buildings of Belfast. The building is 96 feet long, towards Arthur-street, with front of 46 feet wide to May-street, standing on a plot of ground 54 feet wide, leaving an area of four feet at each side. The ground being limited from front to rere [sic], did not admit, of any area towards May-street, which is a disadvantage to the building, it being deserving of a more spacious plot of ground, so as to give it a more imposing effect.

The elevations partake of the Grecian character, or, perhaps, more properly, the Italiam-Grecian, the columns being after the example of the Ionic Temple on the Ilissus, near Athens, and the members and mouldings being also Grecian; but the great height to which the building had, of necessity, to be raised, in order to afford all the required accommodations, height of ceiling, &c. detract from the severe character of purely Grecian examples. In this respect, the architect had a great deal of difficulty to contend with, the front being so narrow, in proportion to its required height.

The front, towards Arthur-street, is good, in consequence of its greater extent, and the two, viewed in perspective, produce a pleasing effect. The Building contains the Music Hall, or Concert-room, which is 70 feet long, 35 wide, and 30 high; with a gallery of 16 feet wide, situated over the grand stair-case, making the entire length inside 86 feet. 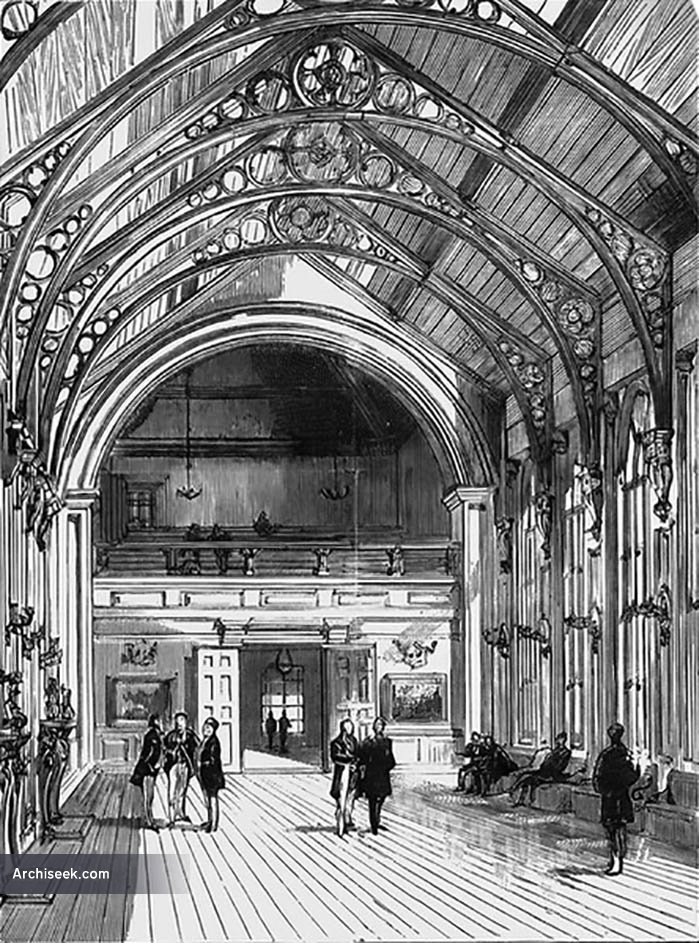 This room is decorated with pilasters, of plain but appropriate character, surmounted by a bold entablature, from which the arched or circular ceiling springs. This latter is divided by massive beams, into deep coffers or panels [sic]. At the remote end of the room a spacious alcove, or elliptic recess, with niche head, has been provided for the orchestra; and, of the latter, several convenient closets are provided for the reception of musical instruments, music books, &c. and a private stair for the accommodation of the performers, with a hall-door from the same.

The Concert-room is approached from May-street through a commodious hall, having a staircase 15 feet wide, and the suffeet [soffit], or under side, panelled. A similar stair, of about four feet wide, leads right and left to the gallery. The Concert-room is to be lighted by a magnificent chandelier, in the centre, as well as by auxiliary ones of smaller dimensions. In the ceiling of this room, a peculiar mode has been adopted, to promote ventilation, to obviate the oppressive feeling produced by large assemblies, combined with the great heat occasioned by gas.

Immediately under the Concert-room is a Supper-room, forty-two feet long, thirty-three wide,and fourteen high, connected by three pair of folding doors, with a Committee-room, twentythree feet by thirty-three, so that the whole may be thrown into one, forming a room 65 feet long, by 33, suitable for public meetings, dinners, &c.

These rooms are finished in a corresponding style, with pilasters round the walls, and deep coffers or panels in the ceilings. The folding doors are of a lofty, spacious description of peculiar construction, formed to fold up, so as to occupy but little space, and to be quite out of the way, when it is required to extend three rows of tables for a public entertainment.

Under these rooms, a large kitchen is provided, with spacious cooking apparatus, and accommodations for a porter and his family, to take charge of the building, leaving a very extensive cellar, suitable for a bonded store, wine vaults, or any such purpose, having a separate gate of entrance from the Stable-lane. The chimney-pieces and grates of the principal rooms are of a solid, massive character, and comport well with the other parts.

The building is of a very great height, yet appears to stand remarkably well. The situation was most unfavourable, having been the site of an old river, which formerly ran in that direction; but every precaution has been taken to render the foundation secure, as far as possible.

The roof of the main building is so contrived, that nearly five feet of the height of the Concert-hall ceiling has been gained out of the angular space, formed by the timbers, which, in most buildings, remain waste and unoccupied, but is here turned to a useful account.

The gallery is lighted through horizontal sashes, forming some of the compartments of the ceiling; and these being glazed with ground glass, produce a pleasing effect. The working, drawings, and specifications were furnished, and the erection of the building superintended, by Mr. Thomas Jackson, Architect, 20, Waring-street; and, we need scarcely add, that the work does him great honour. The building was erected by Mr. P. Lundy, Builder, Joy-street, whose care and execution have, most deservedly, called forth the warmest approbation.” Published in The Belfast News Letter, Friday, 6 March 1840.