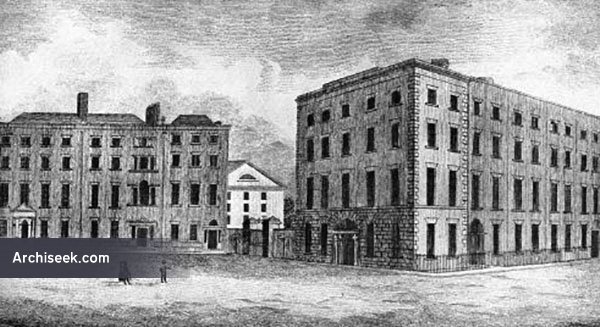 Originally Kildare Place consisted of four houses onto a small square bordered by Kildare Street. Nos 2 & 3 were designed by Richard Cassels, and probably executed by John Ensor, for Lord Massereene and Sir Edward Skeffington Smyth around 1756. After the destruction of No. 1 for the construction of the National Museum in the 1890s and No. 4 for the Church of Ireland Training College in 1886, No. 2 and No. 3 were the only two houses left on the square. They were demolished in 1957, and a brick wall and gate constructed to give access to the rear of Government Buildings.

The Kildare Place Society was founded in 1811 by a group of professional people and businessmen, to provide education for the poor in Ireland. They paid great attention to teacher training that was largely influenced by the monitorial system developed by Joseph Lancaster in England. By 1815, they had constructed a school to designs of William Farrell. Their schoolhouse and No.4 were removed to construct the Church of Ireland Training College in 1886. The Church of Ireland Training College was subsequently demolished in 1970 to provide a site for Agriculture House.