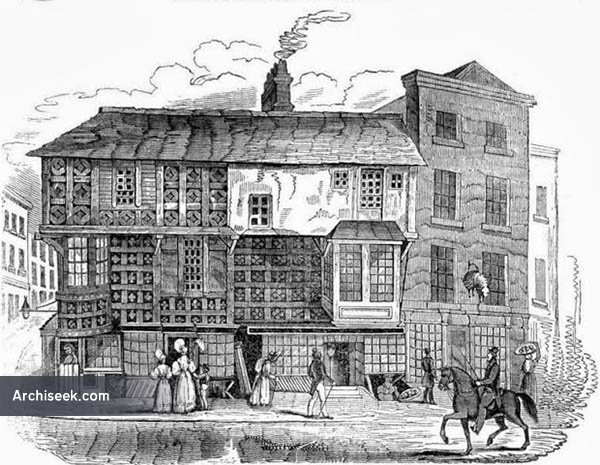 The Wooden House, Drogheda; erected 1570 by Nicholas Bathe at the junction of Laurence and Shop streets; taken down 1824.

From The Dublin Penny Journal, September 15 1832: “It occupied the angle formed by the junction of Laurence’s-street and Shop-street, the principal front being in the latter, and was composed chiefly of oak, said to have been obtained from Melifont park ; it consisted of three stories, the upper projecting beyond that immediately beneath.

The upper or attic story was composed of strong square oak framing, with spandril pieces, each piece forming a quadrant, or segment of a circle, the interstices tilled with plaster ; the principal, or, as we would now say, the drawing-room story, was of a more finished character, consisting of panelling or wainscot, each panel being about a foot square, and fancifully carved in quaterfoils and foliage, executed in good style; the rails and styles were also ornamented with projecting pins or tremails. It is difficult to say how the lower story was arranged, it having under- gone many alterations ; it was, however, extremely low, and latterly divided into several small shops. In the angle on the drawing-room floor was a handsome semicircular bay window, consisting of four divisions, a panel in the pedestal of which contained the arms of Bath, viz. a cross between four lions rampant, with the initials N. B.; this panel was preserved by Peter Van Homreigh, Esq. the late Recorder. There was another projecting window in Shop-street, but it did not appear to be of such antiquity as the rest of the building.

On the bressimer, in Laurence-street, was the following inscription, in the antique raised letters used in the time of Queen Elizabeth, each about six inches long, and each word divided by a star :- Made by Nicholas Bath in the Ieare of our Lord God 1570 Bi Hiv Mor Carpenter.

There is no doubt but at the time of erection this house was considered a “Chef-de-oevre,” and even in later times it was considered a curiosity, and commanded the admiration of many. Taaffe, among others, remarks, “I have seen wooden houses in Pilnitz, Reichenau, and other towns of Bohemia and Germany, but none of such curious and elegant, as well as durable workmanship.” He has, indeed, made a trifling mistake, with respect to its antiquity, as he continues, “The date was carved in the oak, in figures about two feet long!! and I think it was 1074!!”–thus adding only eighteen inches to the length of the figures, and 500 years to the age of the house.

The “Wooden House,” after having, like Napoleon, “fulfilled its destiny,” and being extremely ricketty through “old age and infirmity,” besides suffering under the obloquy of a very indifferent character, having been for many years suspected of harbouring rats, reprobates, and typhus fever, was at length condemned to annihilation by the corporation, and disappeared for ever in the year 1824; and the present handsome modern brick buildings were erected on, its site.”