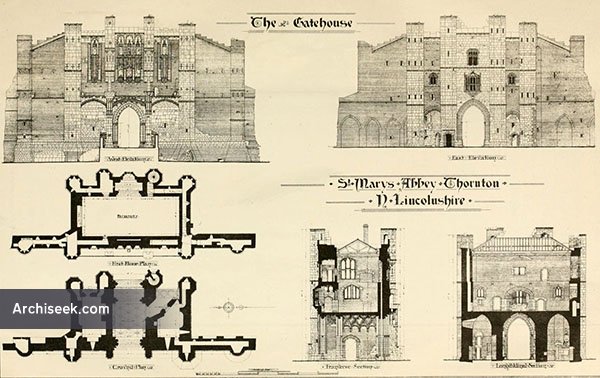 Almost continuous building work over a century from 1252 onwards included a new chapter house (1282–1308); enlargement of the cloister (1322–6); rebuilding the refectory (1327–8); and construction of a large granary (c 1348), the outer gatehouse (1377–82), and a Lady chapel at the east end of the church (1395–c 1418). The main interest of Thornton Abbey lies in the gatehouse which is amongst the earliest large-scale uses of brick in England. It stands two storeys high and is structurally intact. There are few windows in the building, and the internal dimensions are cramped due to the thickness of the walls. The outside of the building is adorned with three almost life size statues directly above the gate. A bridge over the moat adjoins the gatehouse and is fortified with walls and guardrobes. The abbey was closed in 1539 by Henry VIII as part of the dissolution.

Published in The Building News, July 19 1878: “The name of Thornton is derived from Thor, the ancient Northern deity, and its magnificent abbey was founded by William, Earl of Albemarle. The entrance gateway to the abbey is by far the most perfect of any of the buildings of the monastery, is an imposing structure, and one of the finest existing in any part of Eng- land. It is of the Perpendicular style, and was built about 1382. The western or exterior front is defended on both sides by massive brick walls, with an arcade of pointed arches on the inside supporting a wall behind, and terminating in two dwarf towers. A small portion of the massive oak door, well studded with nails, is still hanging on its hinges, but has now advanced a far way to destruction ; and a portcullis, the groove of which still exists in the outer jamb of the doorway, completed the defence. Owing to the disturbed state of the country or the dread of invasion, it being situated near to the mouth of the Humber, the additional outworks necessary were added at a subsequent period. The gate-house itself is built chiefly of brick, cased with stone. The outer face, or western front, is built partly of brick, with stone dressings, the design being very boldly treated ; its pointed arch is richly moulded with flowers and sculptured heads in one of the hollow mouldings.

Next to this is another slightly-pointed arch, with hanging foliations, with the flower ornament inserted in a hollow in this as in all other cases where it is introduced, and most of the gargoyles are now either destroyed or very much decayed. This front is divided by four octagonal turrets into three compartments ; in the centre one, and immediately over the arch- way below, are three elegant niches in two stages, and good canopies ; the panelled and moulded pedestals to the lower stage has a shield and a cross in the front panels. In each side compartment is a similar niche, one of which also retains a figure — the others have disappeared. The three largest, however, remain, and are in a very good state of preservation. The centre of the three is the Blessed Virgin, to whom the abbey was dedicated, and over her head may be descried a very rare and remarkable representation of the Holy Trinity. The archway is groined, and has sculptured bosses and moulded r’bs springing from good corbels panelled in the lower part ; the upper part is ornamented with foliage, like the capital of a pillar. The manner in which the mouldings of the ribs are made to intersect each other at their springing is very clever and interesting.

The inner face, or eastern front, has also four octagonal turrets, and contains several fine and pleasing details. Over the large east arch is a very elegant oriel window, boldly projected, and has annular heads carved in one of the hollow mouldings. It is flanked at each angle with panelled buttresses, surmounted by crocketted finials ; each bay is divided into two lights, with an embattled and moulded tran- som across. The roof is of stone, supported on the interior by moulded arched ribs. Over this is another window of four lights ; two of the mullions of the lower stage, with a portion of the sill, has been taken away : the label mould terminates with f\-.’0 well-sculptured heads. Between the walls are numerous long and narrow passages, leading to rooms which, from all appearances, have been used as guard-chambers. Ascending the winding stair in one of the eastern turrets we soon enter a spacious and noble apartment, the refectory ; it is lighted on the south side by a pointed window of four lights, with plain chamfered jambs and mullions, and on the east side by the oriel window ; the recess is very boldly and characteristically treated, and it appears to have been used as a chapel. On each side of this recess is another pointed window of two lights, with moulded jambs and mullions, and a’quatrefoil in the head ; on the north end is a large open fireplace with moulded jambs and arch. There was originally another room of the same size over it, probably the scriptorium ; several corbels whicli supported the floor of this chamber still remain— it is lighted by a pointed and cusped window of three lights divided by transoms. Again, ascending the turret stair we find the top has a very good croined vault, with foliated ribs of singular but elegant design. The turrets and parapets have alllost their terminations, but they would have been most probably finished in an embattled style. The original roof has long since disappeared, and the late Earl of Yarborough caused a new roof to be erected over the gatehouse. While it in no way disfigures’ the building it has the twofold effect of preserving it from wet and decav, and of affording safety to the visitor, who from the top may obtain an extensive view of the surrounding country, comprizing the Humber, the town of Hull, the Yorkshire hills, and the Brocklesby woods. This building is among those to be visited by the Architec- tural Association during their ensuing excursion. — B. Priestley Shtres. “