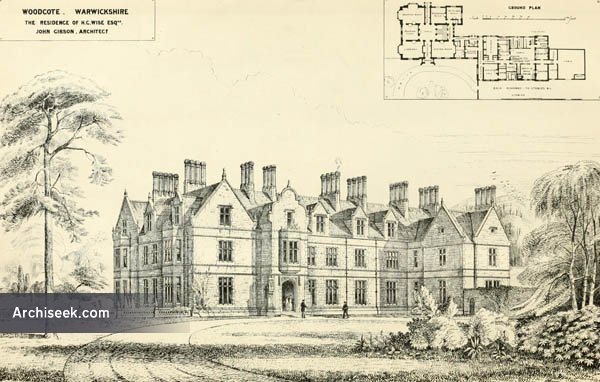 The new house of 1862 was built in practically the same position as the old with stables, farm buildings and a kitchen garden in much the same place. The gardens and pleasure grounds were re-arranged, a reservoir built and five acres of the park were taken to enlarge the garden. Constructed with locally quarried stone, which like most Warwickshire sandstone, it is soft and crumbly. In 1947 the house was purchased by Warwickshire County Council for £25, 654. Following a conversion costing £60,000 Woodcote became the headquarters of the Warwickshire Constabulary in 1949.

From The Building News: “This mansion, of which we give a perspective view, together with a plan, was erected a short time since for Mr G. Wise, Esq., from the designs of Mr. John Gibson, architect, of Great Queen- street, Westminster. The material used for the walling is Woodcote stone, from Mr. Wise’s own quarries, situated about half a mile from the site. The roofs are covered with Kilncote tiles. The principal staircase is of stone up to the first floor, and of oak above. The offices and stables are of stock brick, with stone dressings. The builders were Messrs. Trollope and Sons, and the clerk of works, Mr. Wise’s steward, Mr. John Nicks.”