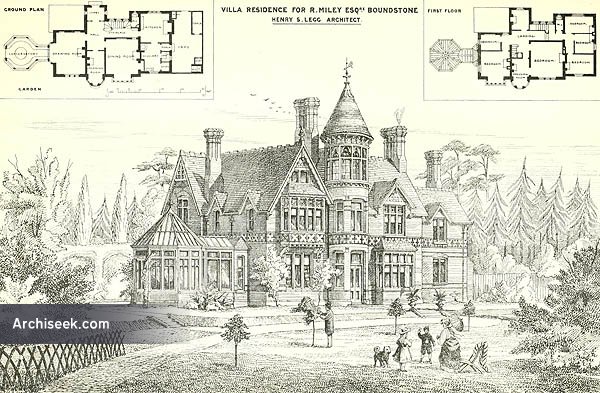 From The Building News: “The view shown in our illustration represents the garden front of a villa about to be erected within a few miles of Famham, in Surrey. It is to be situate on high ground, and in abeautiful locality. In designing it the architect has had in view the adaptation of the plan to the site, as well as to the limited means at his disposal. The south, or garden front commands a very extensive view ; hence tho windows of all the principal rooms have this aspect ; the centre turret also, containing a room with a circular front window commanding tho view all round, is especially designed for this purpose. Tho plan shows the rather peculiar position of the conservatory, the same being attached to tho centre of the drawinroom bay window, which opens into it. The position of the library, which is not at present included in the estimate, is shown by the single line upon tho plan, and this will open out of the inner hall. The walls are to be erected in red brick, with bands of ornamental brickwork, and the roof tiled ; the style of finishing the interior to be simple. The estimate for erecting the portion shown upon the plan (exclusive of the conservatory) is £2,300. The architect is Mr. Henry S. Legg, of 32, Bedford-row, London.”