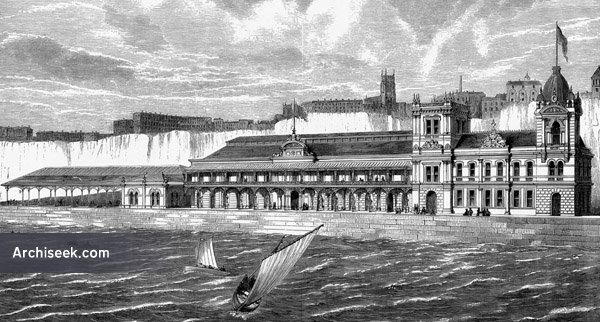 The Margate Skating Rink & Aquarium, Kent as proposed and published in The Builder, September 8th 1877. The imposing title of the Marine Palace was that chosen by its Victorian developers, the grandly named Margate Skating Rink and Aquarium Company, for what would transpire to be alacklustre collection of flimsy galvanised-iron buildings, sandwiching a single brick structure on the chosen site, sitting behind a sea wall. The original plans included a massive building to house what would have been a first-rate Aquarium – a forerunner of today’s sealife centres – but this proved to be nothing more than a pipe dream. Starting at the eastern end behind the wall the Skating Rink was built, and next to that there was a large and substantial brick building of the restaurant, which rose up three-stories from the ground level, and running back from that towards the Harbour was the Swimming Baths. Despite its flimsy construction, the venue prospered. In early 1897 plans were announced to resurrect the proposal for the large Aquarium building, even publishing a very grand artist’s impression. However during the Great Storm of November 29th and 30th of 1897, the huge seas running easily washed over the whole site, demolishing all the iron buildings and making a huge lagoon trapped behind the wall – the wall which was designed to withstand pressure from the front (which it did wonderfully) but not from the back. the result was that the wall collapsed outwards onto the sands, and that was the end of the Marine Palace.