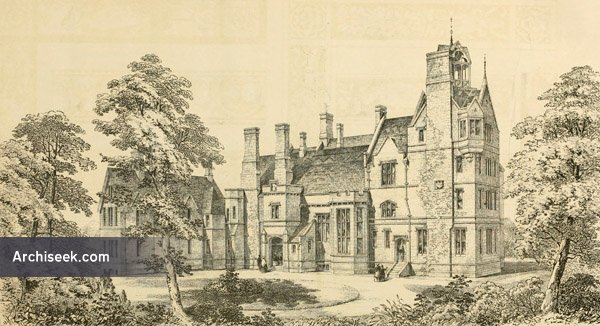 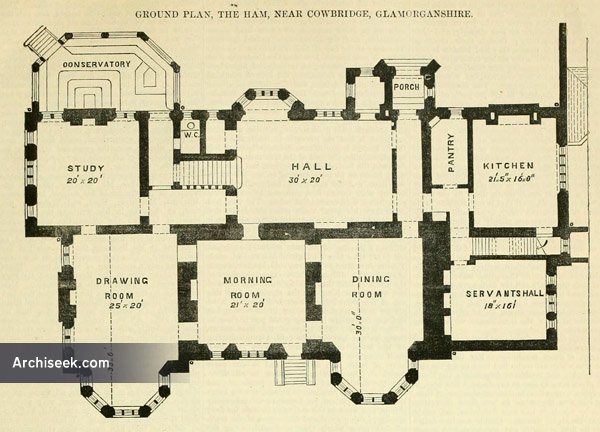 From The Building News: “The house is built of limestone raised on the estate ; internally it is wainscoted neatlv throughout with oak, walnut, and olive wood”, the latter brought purposely from Italy by the proprietor. The golden colour of the panellings has a most beautiful effect. The staircase formed a portion of an old one, and is believed to have come from the old palace at Greenwich, It was added to and fitted up from thc architect’s designs by Messrs, Cox and Sons, of Southampton-street. The building was erected by the proprietor, with local labour, under the supervision of Mr, Willard Winter, The finer portion of the joinery work was executed by Messrs. Longmire and IJurgc; the elaborate carving, of which there is a great deal, both in stone and wood, was almost entirely the work of Mr. Haliday, late of the Crystal Palace, Sydenham; the hall and other chimney-pieces, many of which are full of detail, were executed by Messrs. Poole and Sons, of Great Smith-street, Westminster. The heating. Sec, was done by Messrs. Potter and Son, of South Milton-street, London. The cost of the building, including stables and out-buildings, was just under 2,000, and the whole was erected from the designs and under the direction of Sir Digby Wyatt, F.S.A.”

Incidentally Digby Wyatt died at a nearby house, Dimlands, which he had leased for several years to recover from stress and over-work.