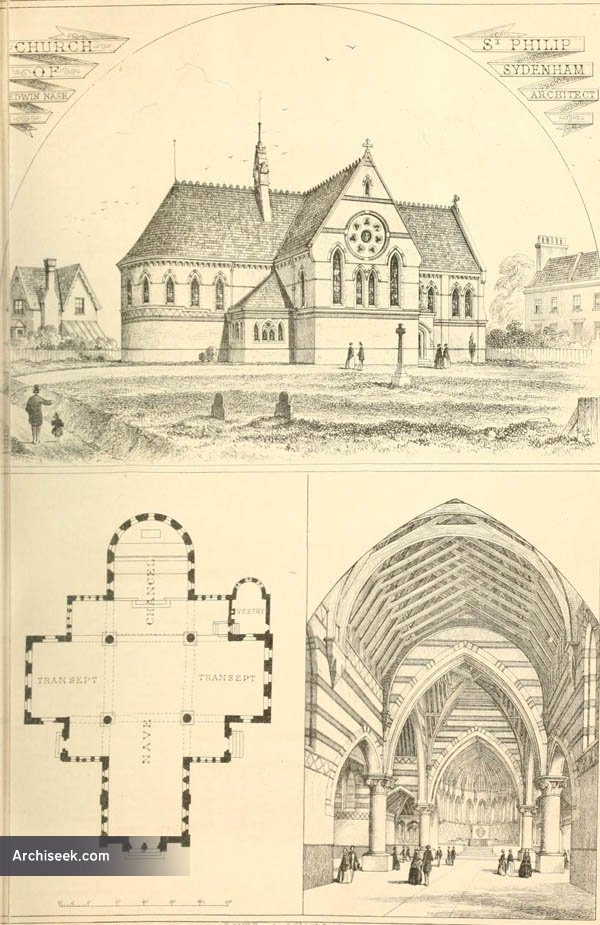 Demolished in the early 1980s to provide a new church and sheltered housing.

From The Building News: “This church was erected in 1865 from the designs of Mr. Edwin Nash, architect, and has been built with some variations and improvements upon what is shown in the engraving, the transepts and apsidal end having been retained, but the box-like projections in the angles have been omitted, and proper aisles, with columnar arcades, have been carried along nave and transepts instead. The stone used was low green sand Kentish rag and upper greensand Reigate, with which latter the walls are mainly built and faced, both externally and internally; the columns, window tracery, &c,, are of Bath, and the arches of the same, alternating with brown Speldhurst stone. It seats 700 and the cost has been £5,000. The contractor was Mr. Carruthers, and a small amount of decoration has been painted by Mr. Fisher. The font is circular and of alabaster, and with four marble shafts, cinctured, extending the whole height, the upper half being attached to the outer circumference, and the lower half being disengaged. It was executed by Mr. Jaquet from Mr. Nash’s draw-ings. It has the inscription “All my tree springs shall be in Thee.” The site is that which was occupied by some medicinal springs that had some repute more than a century ago, anda were named by Evelyn in his Diary.”