1876 – Convent of the Sisters of Charity, Ballaghaderreen, Co. Roscommon 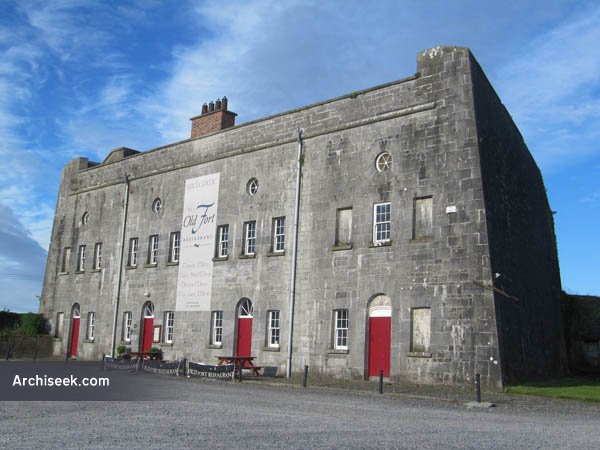 Tete-de-pont or bridge defences which were constructed during the Napoleonic Wars. The defences were designed to delay a military force approaching from the west from crossing the River Shannon to the eastern side. They were part of a line of fortifications on the Shannon, the defences face towards Connaught, assuming a French landing on the West coast. The defences take the form of an elongated triangle with blunted western end, consisting of a sub-rectangular redoubt in front of a wedge-shaped enclosure and connected to it with a pair of diverging stone walls. The redoubt was completed in 1810, the Barrack Block in 1814 and the rest of the defences in 1817. This was at the same time as the reconstruction of Athlone Castle.

There were also extensive fortifications to the West of Athlone, now demolished; at Banagher; two batteries at Inchereky Island, and a Martello tower at Meelick, similar in type to the later towers in England, mounting 3 guns. Also at this time batteries were built along the Shannon estuary, on the north shore in Co. Clare from the West, at Kilcredaun, Doonaha and Kilkerin, on the South shore on Carrig Island and Tarbert Island, and in the centre of the estuary on Scattery Island.

The parliamentary Gazetteer of Ireland, 1844-45 describes Shannonbridge: “Shannonbridge, a village and fortified military station. The Roscommon end of the bridge is occupied by a military work, which forms a tete de pont capable of accommodating a small garrison. The public road bends between the barracks and the fort, passing through a strong gate; and the place, besides being defended by the guns of the fort is protected on the Connaught side by an advanced redoubt on a rising ground to the north of the highway”. The fortifications are closely similar to those at Banagher: but the barracks are larger, and the battery more conspicuous. Shannonbridge is one of the three fortified passes still maintained upon the Shannon, the other two being Banagher and Athlone.”