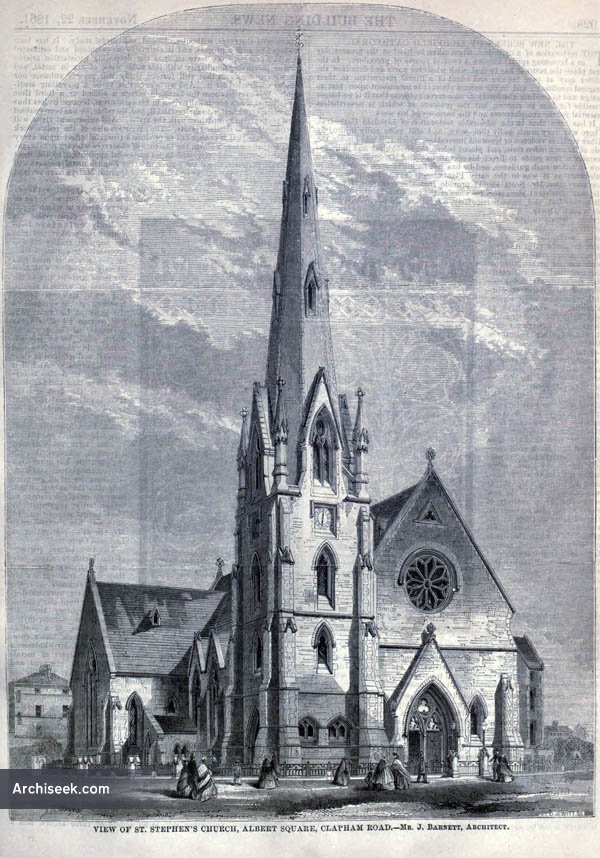 Albert Square is an outstanding example of one of London’s famous ‘garden squares’. Built on what was originally market garden land in the mid-19th century, it was completed between 1848 and 1851. The original 19th century St Stephen’s Church was demolished in 1951; the current church and adjacent blocks of flats stand on the original site.

From The Building News: “THE church of St. Stephens in the parish of South Lambeth, the subject of our principal engraving for this week, was opened for Divine service a few months since. It stands on a waste piece of ground at the back of Albert-square, close to the Clapham-road. The site in part is the gift of the copyholder, T. T. Williamson, Esq., and enfranchised by the Dean and Chapter of Canterbury. It has been erected at the cost of the Rev. Charles Kemble, M. A., rector of Bath, from the designs, and under the superintendence, of Mr. John Barnett, of Gray’s Inn-road.

The plan of the church is to some extent cruciform, terminating at the east end with transepts, small chancel, and a vestry. It is an elegant church externally. The tower, in four stages, with its lofty spire (it is 11 feet square, and 140 feet to the apex of spire), composes prettily with the rest of the church; it stands on the left of the principal and western entrance. It is divided into three floors— the first a library, reached by a circular staircase in the angle of wall; the second-floor a clock-room; and the third, terminating the square of tower, is the belfry.

The walls are built of Kentish rag, with Bath stone dressings. The whole length of the church is 122 feet; the nave is 45 feet wide and 55 feet high, from floor to ridge pier. It is roofed in one span, the roof being supported by six arched principals, springing from small columns of red Mansfield stone, corbelled from walls, and lighted by five gable