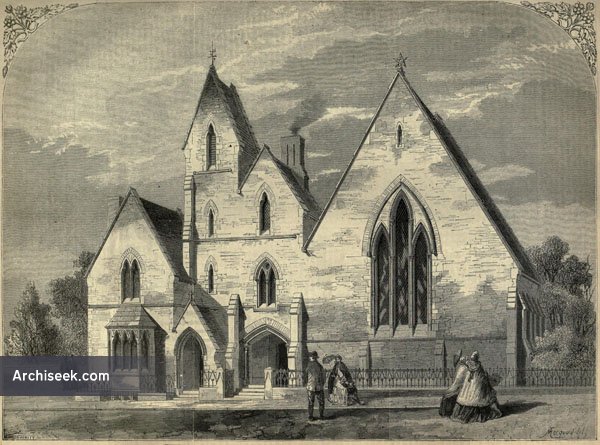 From The Building News: “THIS school, of which we give an illustration, was recently erected to meet the urgent educational wants of an outlying populous locality in one of the first of the new district parishes formed under Sir Robert Peel’s Act. It is intended chiefly for young children of both sexs, hence called “St. George’s Mixed and Infant School” and holds accommodation for 400. In addition to the principal school-room, which is 70 feet by 30 feet, there is one large and two smaller class-rooms with galleries, suited to the mixed system of instruction adopted, which is here found to work very efficiently among the large number of scholars who attend.

The building is simple in its lines, and substantial ; the Early English character being well maintained throughout. A suitable residence for the headmaster forms part of the design. The walls, S feet thick, are built of a hard grey stone from quarries near Macclesfield (somewhat similar to Kentish rag), laid in their self-bedded courses, hammerdressed on the face with Ilollington stone dressings. The roof is of Baltic fir, with wrought arched trusses ; it is covered with Welsh slates, green in color. The cost of erecting the school and residence was about XI ,350, but the purchasing of the site and other additional expenses brought it to upwards of 2,000. The building fund was desired from local donations and from grants from the Government and Diocesan Educational Societies.

Mr. James Trubshawe is the architect, and the whole of the works were executed by Mr. Evans, builder, of Macclesfield.”