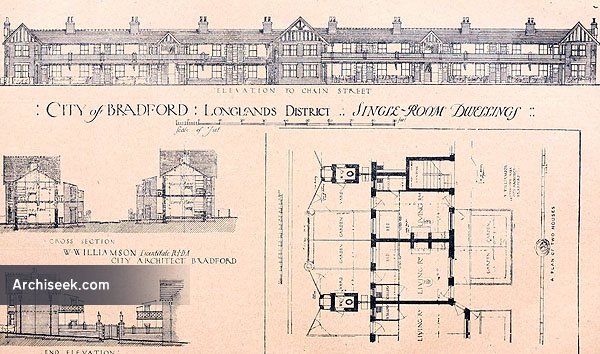 From The Building News, January 1, 1919: “This scheme provides for sixty-three single-roomed dwellings for the housing of 126 persons. The site occupied was formerly a very congested slum area, and the dwellings shown are in addition to a larger scheme of tenement buildings erected some time ago. The single-room dwellings are a departure from the type generally adopted, and has proved to be more popular than the usual tenement dwellings, because a better sense of home life and seclusion is secured. It will be seen that an effect of simplicity has been aimed at, and the elevations have been broken up with a view to avoiding an uninteresting repetition of design. Each house is provided with an iron bedstead, one leg of which is fixed to the floor. This contrivance allows the bed to be swung out into the room for cleaning purposes. These beds have a 12 in. clearance from the wall, and are fixed in a recess which is screened off at the end and the side. Cross ventilation is provided for to the rooms by means of the windows, which have a special device at the meeting rails for the admittance of fresh air, and provision against draught when closed, and each room has a foul air extractor flue. The buildings are erected in brickwork, the external face being roughcast, with ashlar dressings very sparingly used ; the roofs are covered with Westmorland slates, and the floors are fire resisting, being of reinforced concrete, and are covered with linoleum. The estimated rents vary on the ground floor from 3s. 4d. to 4s. 6d. per week, and on the first floor 3s. Id. to 4s. 3d. per week. The long elevation to Chain Street is illustrated, also sections of the end returns. The whole of the work has been executed by. local contractors, under the supervision and to the designs of the city architect, Mr. W. Williamson, Licentiate R.I.B.A.”