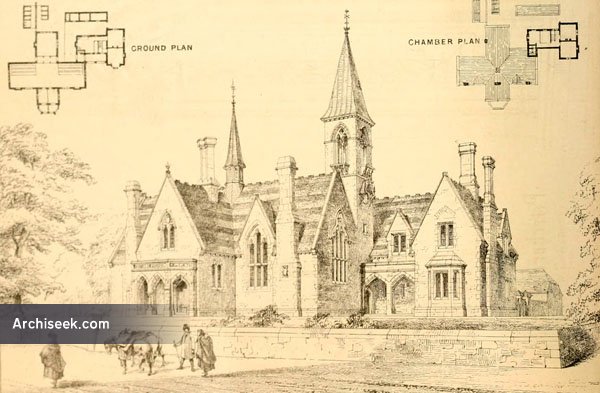 Still in use today as a Church of England Primary School. From The Building News, February 21 1868: “THESE handsome schools have been recently erected at Stogursey, or Stoke-courcy, in the diocese of Bath and Wells, by Sir Philip Atland, Bart., of Fairfield. The principal room, 35ft. by 20ft., is fitted out for boys and girls, and a spacious class room is in the rear, opening into it by means of a pointed .arch. The lobbies are formed of wood framing, and are easily removed on occasions of anniversaries of school treats.

Opposite the class room is a projection, appropriated for boys’ and girls’ cloak rooms, the whole forming a Greek cross on plan. These cloak rooms are fitted with fireplaces, and are used by those children who attend from distant hamlets, where no schools exist, for dining rooms. The great room is fitted with desks and benches, so made as to serve as adult sittings upon occasions of village lectures, &c. At the junction of the school with the house is a Belvedere tower, with stone staircase ascending to the open belfry, the windows of which are fitted with wide stone slabs for telescopes to command views of the extensive range of Quantocks on the south side, and of the Bristol channel and Welsh hills on the west. Ol.ades have been cut through the Fairfield woods, so as to bring in the schools as an architectural feature. Mr. Merrick, of Glastonbury, executed the dressed stone work, Sir Peregrine’s own men doing the hard stonework under the direction of Mr. Millard.

The walls are built of a hard sandstone, from the Quantock hills, of a pale pinkish red, each stone squared and dressed to a fine face, which contrasts well with the cream coloured dressings from the Bath quarries. The windows are filled with rolled cathedral tint glass, with stamped borders, by Messrs. Powell, of Whitefriars. There is a heating apparatus, besides open fireplaces. The whole buildings have been erected, at a cost exceeding £3 000 and form a conspicuous block, grouping with the conventional Norman church and the remains of the medieval castle. Mr. Norton, of 24, Old Bond-street, Londou, was the .architect, from whose designs, and under whose superintendence, the whole of the works have been carried out.”