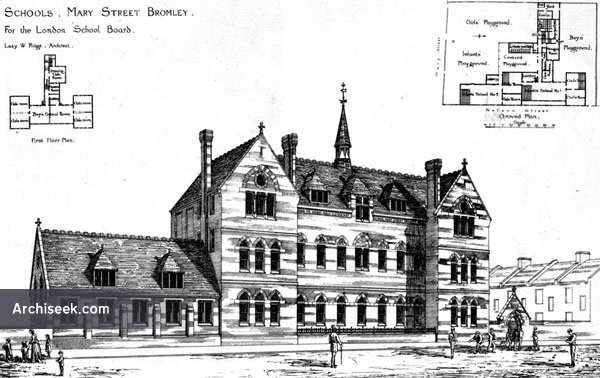 Published in The Building News, July 18 1872. Designed for the London School Board. “These buildings, some description of which appeared in our pages on the l6th May, 1873, are illustrated in our present issue. Tho design was among the first selected in the first series of limited competitions promoted by the London School Board, and, except that the accommodation for infants has boon raised from 240 to 400 by tho addition of the one-story building shown on tho drawing, tho works have been carried out almost exactly according to tho original design. Tho buildings are warmed by fireclay stoves, constructed to admit warmed air into the rooms, and ventilating flues for tho exit of foul-air are provided and carried to tho top of the chimney shafts. The windows generally are made to open as double-hung sashes, while those near tho ceilings are hinged to fall inwards as hoppers, and they thus give an upward tendency to tho air that passes through them, whereby direct draught is avoided.

Tho movable partitions required by tho Board for tho purpose of separating tho rooms for the different classes are formed with double screens hung from tho top, with a considerable air-spaco between them. Though they are not so perfect as to exclude all sound, they will, it is believed, be found to answer all practical purposes, and will prevent the classes disturbing one another ; and they are found to be as efficient for this purpose as a 9in. wall with an ordinary door therein. The screens across the main schoolrooms pass clear away from the rooms into a drop prepared for them in the lavatories adjoining. The girls’ schoolrooms on the second floor correspond exactly in arrangement with the boys’ schools, shown on the first-floor plan. The works’ have been carried out, under Mr. Lacy W. Ridge’s superintendence, by Mr. B. E. Nightingale, Mr. Pursell has acted efficiently as clerk of works. “