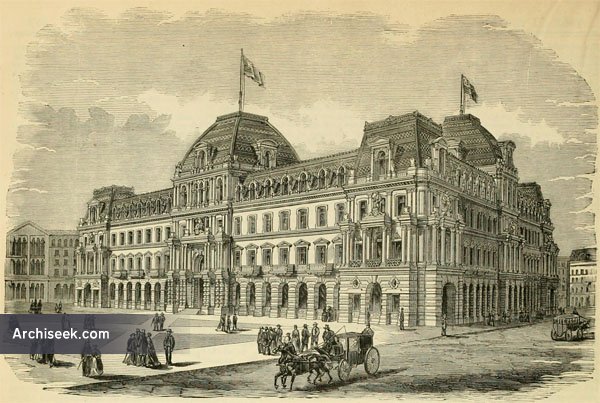 Designed by architect Alfred B. Mullett for a triangular site across City Hall Park from New York City Hall. Built after an unsuccessful architectural competition where fifty-two designs were submitted, but none were judged acceptable. After the failure of the competition, five firms were selected to collaborate on a single design. Richard Morris Hunt, Renwick and Sands, Napoleon LeBrun, Schulze and Schoen and John Perret together produced a Second Empire concept.. Following complaints by Mullett that the proposed design was too expensive, he was awarded the the project, which nonetheless cost $8.5 million. Mullett’s building was never well received. Commonly called “Mullett’s Monstrosity”, it was demolished in 1939 and the site was used to extend City Hall Park to the south.

From The Building News: “Last year the people of New York, having at length become ashamed of their ancient and incommodious Post Office, which was simply an old Dutch church, converted as well as might be to secular requirements, determined to erect a new one, which should, of course, be *’ the biggest, handsomest, and best arranged on either side of the Atlantic.” From the many designs submitted by competing architects the Com- missioners ” perfected ” that illustrated on page 228. The building, which will be in the Renaissance style, will be erected ou a piece of ground at the south end of the City Hall Park, and in front of a large open space. It will be constructed of granite, marble, wrought and cast iron. In plan it will be an irregular quadrangle, the three longer sides being alike in design and ornamentation, and each having a frontage of three stories in height, surmounted by a Mansard roof, having at each angle handsome pavilions. At the southern end a large pavilion will be carried up to a fourth story, ornamented by Corinthian pilasters and crowned by a full entablature, supporting a domed quadrangular roof, which will form a fifth story. In each face of this dome will be pl.aced a large enriched dormer window, and the roof and dome will be each surmounted by ornamental borders and cappings. The height of the dome will be 16Oft. from the street level to the summit; it will be decorated with columns on its four sides, and will have large clock dials in each face over the entablature. The central pavilion, facing northwards towards the City Hall, will be of similar design without a dome. The first story will be 22ft. high, and consist of a series of arched openings, supported by square piers, tho whole rusticated in each alternate block and the keystones of the arches enriched. 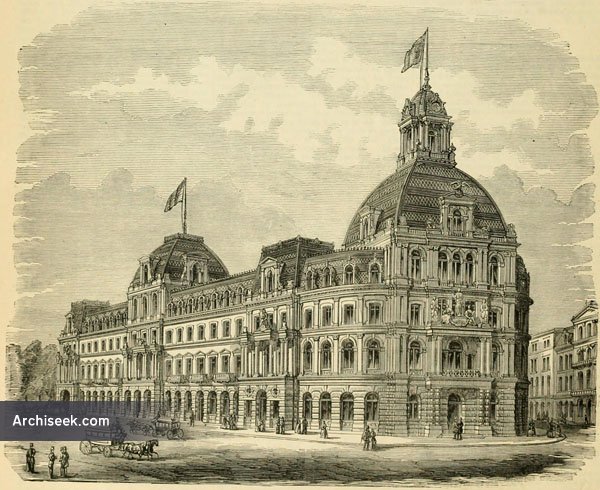 On each side of the grand entrances will be introduced rusticated Doric column.’^. The second story will be 15ft. high, ornamented with Doric columns supporting broken entablatures. In the third story the pavilions will be enriched with pilasters in place of columns, and the entire story crowned with a full entablature. In the fourth story the Mansard roof will extend over the curtain and the angular pavilions, being pierced with dormer windows and suitably decorated. Tho arch over the north main entrance extends above the first story, and the space above it will be decorated with panelling, the keystone of the arch bearing the United States shield. Projecting balconies on cantilevers will be placed on the curtain in front of each alternate window, and other balconies will be formed in the pavilions between the columns. The building will be embellished with statuary as follows ; — Ou the south pavilion a central emblematical figure of America, with “Commerce” and “Industry” on either side; over the right hand entablature “Washington;” over the left ” Franklin.” On the north pavilion a marble group of “Justice,” with ” History” and ” Peace;” also emblematical figures of “Strength” and “Truth.” Over the centre pavilion, facing Broadway, a group representing “The Arts,” “Virtue,” and “Honour;” and on the Broad- way corner pavilion “Literature” and the “Mechanical Arts.” On the Park Row centre pavilion “The Genius of Science,” and on the corner pavilion “Agriculture” and ” Navigation.”

Besides being used as a Post Office, part of the building will be set aside for the uses of the United States Justice Courts, with judges’ chambers, clerks’ rooms, &o., attached. The public corridor or great hall of the Post Office will form a piazza 600ft. long and 25ft. wide. Five experienced architects have tho superintendence of the work, and it is said that the building can be completed in two years at a cost of 3,500,000 dols. “