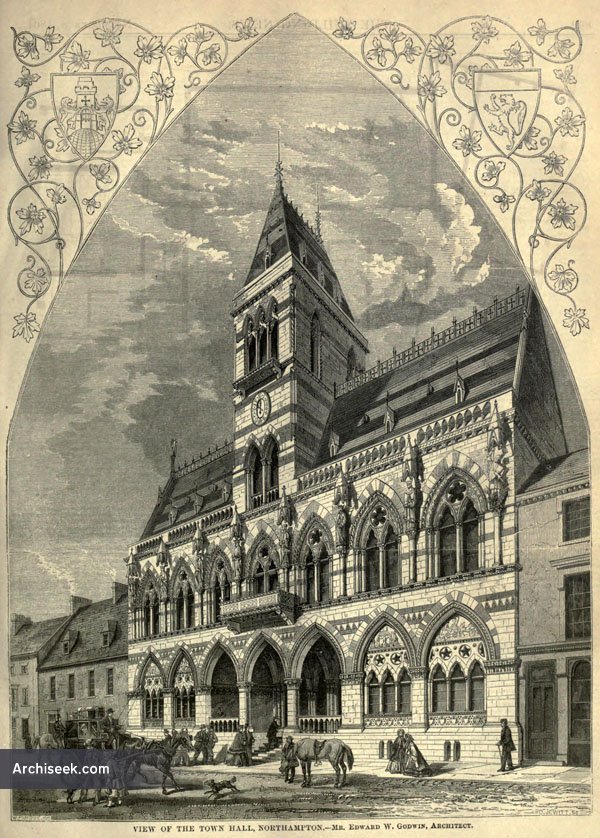 Built to the design of Edward William Godwin, begun when he was only 28, between 1861 and 1864. As well as housing Northampton Borough Council, it is also used for a variety of civic purposes, including a former court and cells. The Guildhall has been extended twice – the west wing was extended in the same style as the original between 1889-92 by Matthew Holding. In 1992 a further, more modern extension was made to the east wing.

From The Building News: “THE accompanying Engraving represents a view of the new Northampton Town Hall, now erecting from the design of Mr. E.M. Godwin, architect, of Montpelior, Bristol. This design was selected from upwards of 50 other designs submitted in competition by us many competitors, and is unquestionably a very satisfactory and successful result.

The principal facade which we now engrave faces St. Giles’-square, and possesses great merit. It has much resemblance to the facade of the New Museum at Oxford, nut only in design, but also in its details. The Town Hall character is well expressed, and when the building is finished we know not of a public building of its class that will be its equal in architectural propriety or beauty.

The tower, a notable feature, will not be square, and will be better for that arrangement. In this the bells in the old hall, in the Market-place, will he rehung. The county museum, an apartment but little visited, will be in the roof, an economical and judicious arrangement. Each niche in the space between the windows of the upper floor, will have a statue of a king or other notability who has by bis deeds, given interest to the town or county, and the spaces above the window lights of the ground floor, will illustrate the incidents connected with these characters.It was once suggested to dispense with these acccssories, but we think the council would do wisely to see this part of the design carried out fully and at once. To leave these niches tenantless would be most unsatisfactory. Not only would it deprive the design of much of its character, but would be also injurious to the interests of the architect, and we hope for the interest of all concerned, the building will be erected as shown in our engraving.

We are glad to congratulate the people of Northampton in their being likely to possess, at last, a public building worthy of a town so celebrated.”