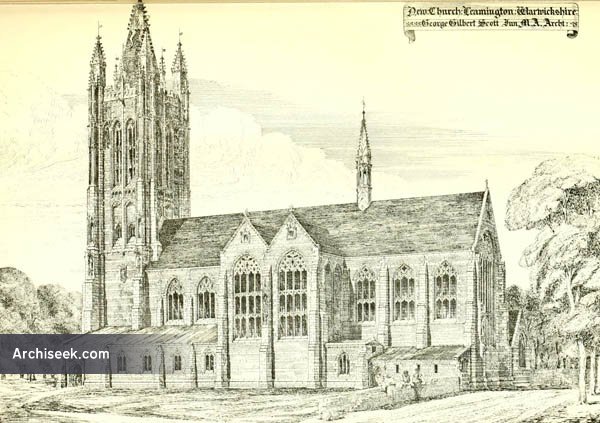 St. Marks Church completed in 1879 with later additions and alterations including C20 buildings to north. Erected in memory of Dame Francis Wheeler, endowed by her brothers Charles Carus-Wilson and Edward S Carus-Wilson. Red brick with ashlar banding and tracery, plain tile and leadroofs.

From The Building News, November 1874: “We give a photo-litho illustration of this handsome church, from the designs of Geo. Gilbert Scott, jun., M.A. It is cruciform in plan, though the projections of transepts do not extend beyond the line of aisles. The double gable treatment to the transept is a good innovation upon the ordinary flat-pitched roofs in churches of this style. Another feature noticeable is the roof of nave being continued uninterruptedly to the east end, and the great height of clerestory. The style is Late Decorated.

This church, of which we gave a perspective view hist week, is to be erected in the parish of Milverton, in part from the bequest of a deceased benefactress. The materiais are bricks, with dressings of Kenilworth and Bath stone. Internally, the double transepts will form an unusual and striking feature ; the piers and arches which open into them will rise the whole height of the nave walls. The organ-chamber opens into the north transept and into the chancel. Below it is to be a side aisle giving access to the sanctuary, and also to a large parish-room which abuts upon the church at this point, and is now in course of erection. This room will serve the purpose of a choir-vestry, and the clergy-vestry will adjoin it. The chancel will be arcaded internally, the east-end enrichents rising to the roof, which is boarded to a coved form throughout. The side aisles are to be groined in wood. The vicarage house faces the church, and is nearly completed. The architect is Mr. G. Gilbert Scott, of 7, Duke- street, Portland-place ; and the builder is Mr. G. F. Smith, of Leamington, who has already erected the vicarage.