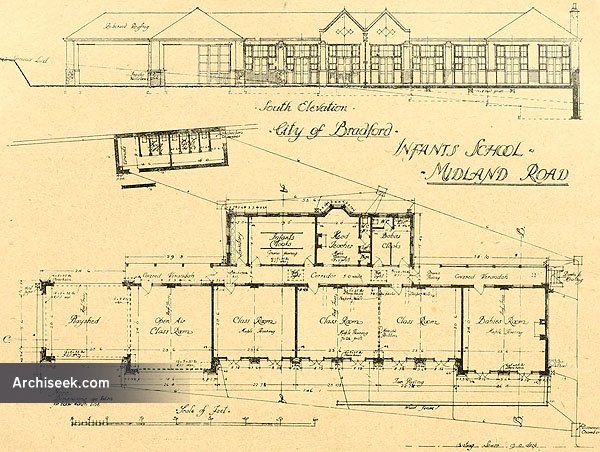 From The Building News, January 29, 1919: “This school has recently been erected in the Midland Road, Manningham, for 250 infants. The front aspect is south- east, and entrances are provided from Midland Road and from Bateman Street. An attempt has been made to economise as much as possible in the general planning, and the school is not provided with a central hall. In place of this two of the class-rooms are so arranged that they can be thrown into one room by sliding back the collapsible screen forming the division, and this room is used for assembling and dismissal exercises. The babies’ room, at the east end of the building, occupies a corresponding position to the open-air classroom. This is fitted with collapsible screens on the east and west sides, land abutting another classroom is a play shed, suitable for easy conversion into a class-room should the necessity arise. A corridor runs the whole length north of the school. The cloakrooms, lavatories, and teachers’ room are placed centrally out of this corridor, and a separate cloakroom, w.c, with lavatory, is provided for the babies. The school is cross ventilated, the corridor being kept low, and the cloak and other rooms being covered with a flat roof. The openings to the class-rooms on the front elevation have glazed screens, which extend to the floor and doors open outwards. Externally the walls are faced with wallstones up to the cill level, and above this are built in brick finished with rough cast. The internal walls have redwood dados to the class-rooms, finished above in plaster, and the corridor, cloakrooms and lavatories have glazed brick dados. The furniture is of a loose, light, and portable character to facilitate quick removal, which is particularly necessary in the two class-rooms previously referred to being used for assembling. Garden plots have been laid out for the use of the children, and the west portion of the site not used for playground has also been planted, and this gives a very pleasing setting to the school.”