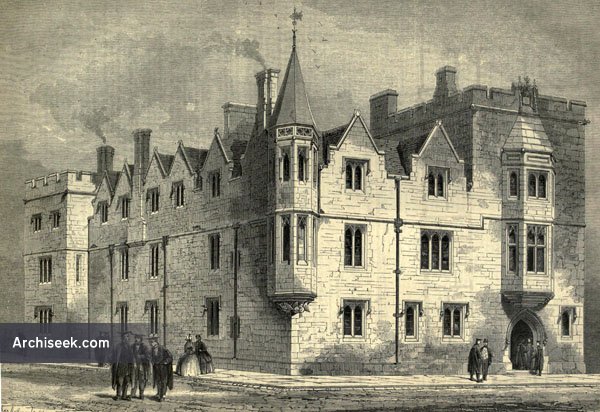 Originally named Master’s Court and located across the street from Great Court, these two courts were entirely paid for by William Whewell, the then master of the college. The north range was later remodelled by W.D. Caroe.

From The Building News, April 19, 1861: “THE visitor to Cambridge must have observed the great improvement made in Trinity-street by the removal of the dilapidated premises for many years in the occupation of Messrs. Matthew and Gent, and the substitution of the fine building for the accommodation of the students of Trinity College, a view of which forms our illustration this week. The building is now completed, and forms a very favorable specimen of collegiate architecture, and a roost interesting addition to the public buildings of Cambridge, The street in which the building is situated has been considerably widened by placing the new edifice some distance back from the adjoining houses, in order to effect which the master of Trinity, voluntarily and with a commendable spirit of generosity, gave up a considerable portion of the necessary ground without compensation.

The building contains 24 sets of rooms with porter’s lodge, &c., the relative distribution of which may be seen by reference to the ground- plan accompanying the view. The building is faced with Casterton stone, and has some finely executed carvings in the front portion. The whole cost of the erection was about £10,000, exclusive of the purchase of the ground. The architect is Mr. A. Salvin, of London, and the builder Mr. George Smith, of Pimlico. A portion of the building is already occupied by the student of Trinity, and the rest will be occupied next term.

Although, from a resemblance to collegiate buildings at present or formerly existing in the University, it might be called a hostel, it cannot strictly be called so in the sense of the recent Act of Parliament, for the hostels there described are institutions separate from the Colleges this building, however, Is recognised both by the College and the University as part of Trinity College. It is called ” the Master’s Court.” Tt is contemplated at some future time to extend this collegiate building the whole length of All Saint’s passage.