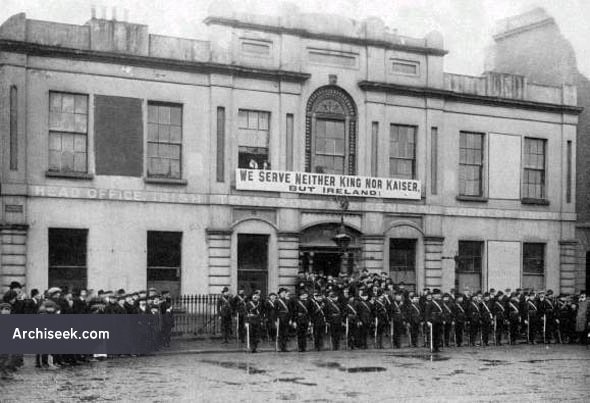 Originally built in the 1820s as Northumberland Hotel, with a coffee house and hotel. Later part of the building was converted into a Turkish baths. Eventually purchased in 1912 as a headquarters for the ITGWU trade union. Following the outbreak of World War I a banner reading “We serve neither King nor Kaiser but Ireland” was hung on its front wall, and within was printed the newspaper The Irish Worker.

It was on the street in front of the building that the leaders of the rising assembled before their march to the General Post Office on Easter Monday. Destroyed in the 1916 Rising by bombardment from the British Forces, even though it was almost empty.

Reconstructed in 1918 by Richard Orpen of Orpen & Dickinson. Later demolished to build the current tower in the 1960s – itself now under threat of redevelopment.