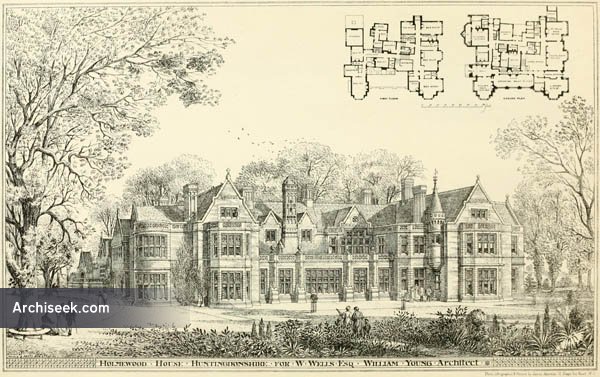 A fine example of Tudor Gothic revival building. Between 1944 and 1945 the house and grounds at Holmewood Hall was used by the United States Office of Strategic Services (OSS) for packing airborne containers to be parachuted into occupied Europe. Holmewood Hall was bought by British Sugar in 1951, initially to serve as little more than a document warehouse. Now a conference venue.

From The Building News, December 11 1874: “is mansion has been erected on the estate of W. Wells, Esq., at Holme, Hunts. The external walls arc built with red bricks. The window jambs, cornices, &c., are partly in red moulded brick and terra-cotta. The mullions and transoms are Ketton stone, and the roofs are covered with brindle coloured tiles. The circular bay on the left-hand corner of our illustration has been omitted in carrying out the work. The architect is Mr. W. Young, of Exeter Hall, Strand.”