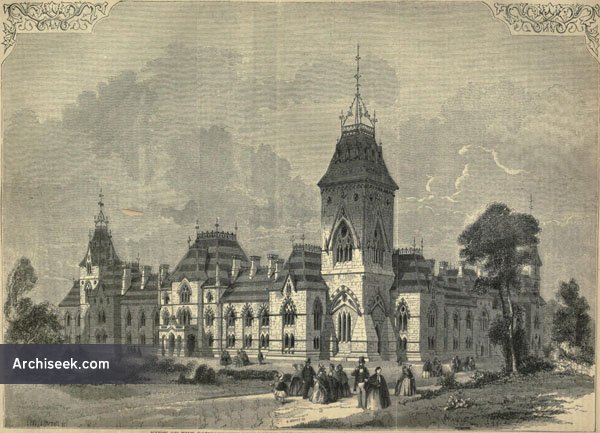 In May 1859 proposals were invited for Ottawa’s intended parliamentary and departmental buildings and governor general’s residence. The first premium for the design of the departmental buildings, now known as the east and west blocks, was awarded to Stent & Laver’s proposal in the fashionable civil Gothic style, while their entry in the same style for the parliamentary building secured second prize. The winner of the parliamentary building was Toronto partnership of Thomas Fuller and Chilion Jones. The east and west blocks and the Fuller and Jones library comprise the surviving elements of the original complex, much of which was destroyed in a fire in 1916.

Contracts for construction of the departmental buildings were let late in 1859 and the foundations were begun the following spring. By 1861, however, the work was behind schedule and it had become apparent that the costs had been seriously underestimated. Building was halted at the end of that season while a special commission made an inquiry. As a result, all the architects except Thomas Fuller were fired. The work was completed by Fuller, with Charles Baillairgé under the supervision of Frederick Preston Rubidge, the senior architect of the Department of Public Works.

From The Building News, March 8 1861:”IN our illustration we publish one of the buildings of the Government offices, of which there are two. This design, and its companion building of the same area, are those for which the first prizes were awarded to Messrs. Stent and Laver, in October, 1859. They contain all the departmental offices of the Government, and include, also, offices for the Governor-General and his staff, with the Executive Council, numbering together upwards of 300 rooms of large size, with corridors, safes, record-rooms, telegraph and post offices, messengers’ and porters’ living rooms, and all the appointments necessary for the various departments of the public service. The sides of these buildings are about 350 feet in length, and are arranged, in connection with the Parliamentary building, to form three sides of a quadrangle. The style of architecture being the same as that adopted for the Parliamentary building, and the whole faced with the beautiful sandstone of the district, will form, when completed, a magnificent group unequalled on the Continent of America, and in every respect worthy of the greatness to whi.;h Canada is rapidly advancing.

The designs and arrangements for the buildings and the laying-out of the grounds received the unqualified approbation of his Royal Highness the Prince of Wales, during his recent visit fc) Ottawa, on laying the comer-stone. The arrangements for heating and ventilation are being made on the most extensive scale and on the most approved principle — the Tault system being that adopted. The buildings are being made fire- proof ; the floors constructed of iron joists, of Fox and Barrett’s patent, and laid with concrete and cement. The contractors are Messrs. Jones, Haycock, and Co., who arc carrying out the work with their usual energy and spirit, so as to ensure the completion of both buildings by the beginning of March, 1862. The heating and ventilation form a separate contract, and have been intrusted, together with the Parliamentary buildings, to Mr. Charles Garth, of Montreal. The buildings are being carried out by the architects, Messrs. Stent and Laver, to whom also the second prize for the Parliamentary building was awarded.”