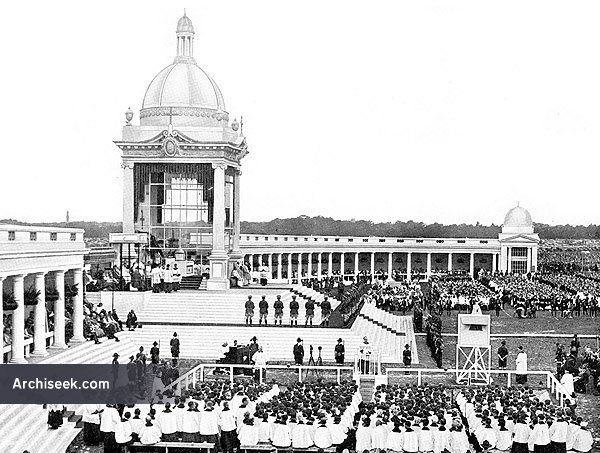 The 31st International Eucharistic Congress, held in Dublin 22–26 June 1932, was one of the largest eucharistic congresses of the 20th century. The final public mass of the congress was held in Phoenix Park at an altar designed by the Irish Architect John J. Robinson of Robinson & Keefe Architects. Robinson initially studied for the Ministry before turning to architecture and being apprenticed to George O’Connor – he later specialised in Church building. Classical in design, the altar was raised and flanked by two curved colonnades ending in small pavilions. The construction was dismantled after the event.

John McCormack, the world famous Irish Tenor sang at the mass. Approximately 25% of the population of Ireland attended the mass and afterwards four processions left the Park to O’Connell Street where approximately 500,000 people gathered on O’Connell Bridge for the concluding blessing given by the Papal Legate, Cardinal Lorenzo Lauri.