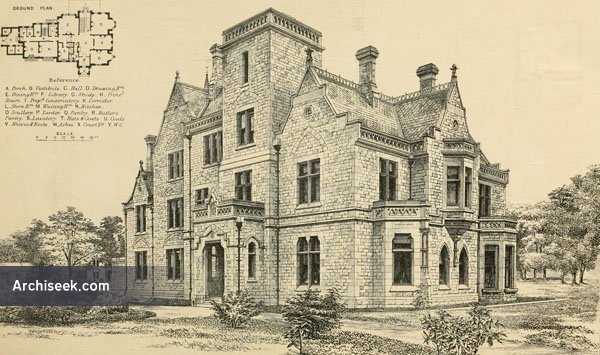 A private home until it became a Methodist church in the 1930s, which it still is to this day. From The Building News, January 8 1869: “ELM KIDGE, intended as the residence of the late John Pease, Esq., is situated close to the town of Darlington. Commenced about two years since, it has just been completed from the designs of Mr. G. Gordon Hoskins, A.R.I.B.A,, architect, of Darlington and Sunderland. The building occupies a most picturesque site, surrounded by pleasure grounds of moderate extent, and commanding an excellent view of a beautiful wooded valley flanking the River Tees, with the Cleveland hills in the distance. Professor Kerr has said that “a good house is like a good square of infantry ; it looks you full in the face all round.” These words may certainly be applied to Elm Ridge, for all faces are equally carefully designed and well finished. The external walls and dressings are of stone from the Dunnhouse quarries, near Staindrop, Yorkshire, the former being faced with coursed and gauged pitched blockers with splayed beds and vertical joints and backed with rubble work to the width of ]5in.; then occurs a space or cavity of 2Jin. and a hall: brick lining walled in cement, the lining being tied into the stone work by means of wrought-iron ties with a V-shaped drip, as in annexed sketch, so that any moisture or damp from the stone work may drop from the point of the V at into the cavity instead of being conveyed to the brick lining ; this, however, is not the only precaution taken against damp. The whole of the footings and the basement walls below the ground line are covered with a coat of liquid asphalt, .and in all the walls is inserted a damp course composed of two courses of elate bedded in cement the full thickness of the walls.

The shafts to the bay window in study and oriel window in boudoir are of red Aberdeen polished granite. The slating is of Bangor slates, with every alternate four courses cut to pattern and furnished with iron cresting. The principal corridors and offices on the ground floor are laid with Messrs. Maw .and Co.’s tiles. The staircase is of the English Baronial style, and has an imposing effect from the entrance hall. The joiners’ work is of wainscot oak, St. John’s pine, and red deal, the latter bein; stained and varnished. The contractors for the various works were as follows: — Masonry and brickwork, Mr. Thomas Hobson, Darlington ;carpenter and joiners’ work, Mr. John Windale, Darlington ; slating, Messrs. Wharton, Darlington ; plastering, Mr. R. M. Ormerod, Carlisle ; plumbing and glazing, Messrs. W. Russell and Sons, Darlington ; painting, &o., the late Mr. William Garthwaite, Darlington ; carving, Messrs. Farmer and Brindley, of London. The coat of the building is about £8,000. Mr. Pease died at one of his residences, Cleveland Lodge, Great Ayton, on the 20th of July, just as he was about to occupy Elm Ridge, ilia widow and daughter have, however, chosen it as a permanent residence.