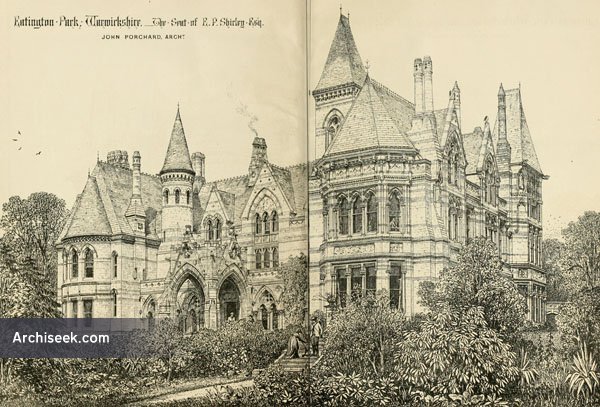 Belonging to the Shirley family for hundreds of years, in 1858, Evelyn Philip Shirley, “finding the property in much need of repair”, decided to carry out a major rebuilding programme. He opted for the services of John Prichard the Llandaff diocesan architect. Prichard regarded himself as a “true disciple of Pugin”. The work lasted from 1858 to 1862 and involved taking down the external walls and rebuilding around the core or interior of the old house.

The house was completed with the heightening of the roofline and the addition of tall chimneys and contrasting round and square turrets. A Long Gallery was built on the second floor and features a carved star window based on a 15th century Venetian design. The Gallery staircase in the square tower is made from teak and acacia wood grown on the estate. A carved Saracen’s head forms the end-piece of the banister rails. The entrance hall was also enhanced by the building of a new glass vaulted cloistered conservatory of a classic 13th century French design, as well as a vaulted carriage-porch leading into the cloister from outside.

E.P. Shirley died in 1882 and his son Sewallis was the last member of the family to live at Ettington Park. For most of the 20th century, the family resided in Ireland. After some years of dereliction from lying empty, the Shirley family have leased and restored the building as a hotel.

From The Building News: “EATINGTON PARK, the seat of E. P. Shirley, Esq , is situated about six miles from Stratford-on Avon, near the village of Newbold, on the road to Shipstou-on-Stour. The estate and house have belonged to the Shirley family almost from time immemorial ; and part of the latter is of considerable antiquity. Before the last modification, by which it was converted into the picturesque structure shown in our illustration, it had been completely modernized ; the father of the present Mr. Shirley having largely added to it according to the taste, or rather want of taste, of the last century. It had then assumed the appearance of one of those huge featureless parallelograms, which, built at that period, still deface so many of the fair parks of our English nobility and gentry ; but as it contained an ample number of goodly proportioned rooms there seemed every probability of its being doomed to hand down to many future generations all the ugliness of its exterior. To the cultivated taste of Mr. E.P. Shirley, however, something more was needed than a spacious and comfortable residence, and a more consistent character for the building was desired. Mr. John Prichard, of Llandaff’, was therefore consulted, and under his direction the Palladian portico and sundry pseudo-classical excrescences were removed, and an entirely new casing to the mansion was put iu in accordance with designs of that architect During these operations the interior was not more affected than was absolutely necessary to insert the new windows and make good the old work to them. As will readily be understood by our readers, it was a far more difficult task under such circumstances to build the whole into a harmonious composition than if the entire structure had been rebuilt.

Our view shows the entrance and garden facades. The principal bay window in the centre is that of the drawing-room ; that at the extreme right is of the library ; and that to the left belongs to Mr. Shirley 8 own room. In the high-pitched roof over the right wing is a large gallery, used as a museum, and lighted by the dormer windows. This apartment is reached by a staircase in the square tower seen in the centre. Between the wings, in front of the receding portion of the facade, is a wide corridor roofed with glass ; and from this projects the carriage porch, which is vaulted with stone. The smaller circular tower leads from the better portion of the ground to that of the top floor, so that the latter may be reached independently of the servants’ staircase, the principal one not being continued above the first floor. The various stones used in the construction were mostly from Mr. Shirley’s estate or its immediate neighbourhcod ; and with them a remarkable polychromatio effect his been produced. The rest of the work is of white lias limestone used in regular courses, thicknesses varying from lin. and Sin. to lin. and 2in. ; the quoins are of Camden stone, the tint of which is a deep yellow ochre ; the bands are of a dark brown stone, and of blue and white lias ; the shafts of the columns are of blue Hanam stone, from the neighbourhood of Bristol, and red Mans- field ; and all the carving is executed in white lias. The roofs are covered with Westmoreland green slates, and the ridges are decorated with cast lead ridge crests. Subjects from the family history of the Shirleys are carved in the panels seen in the illustration. These were designed by Mr. H. Armstead, sculptor.”