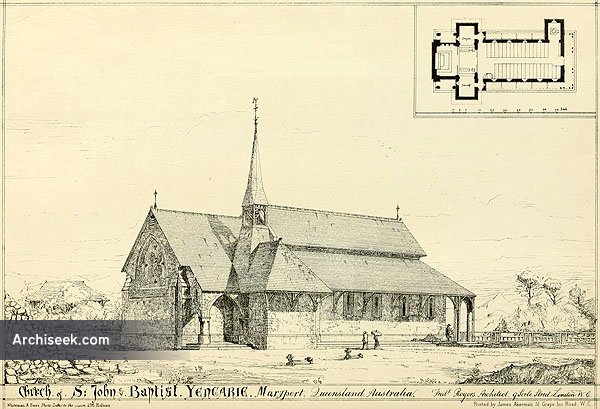 Published in The Building News, November 14 1873: “The view of this church, taken from the northeast, represents a design in which the excessive heat of the climate has been considered and provided against as much as possible. In order to keep the interior cool, the eaves on the north, south, and western sides have been brought forward so as to keep the direct rays of the sun from striking upon the walls. The whole of the roofs are constructed double, in order to impose a current of air between the two thicknesses. The walls are of concrete, with stone dressings. The windows of the nave are not to be glazed, but defended by jalousie blinds, hinged upon the out- side, and a series of louvre ventilators are formed throughout the length of the nave roof. The east window of the chancel is intended to be filled-in with stained glass. The church will be built at the cost of Robert Tooth, Esq., of Yengarie, and is to be dedicated to S. John the Baptist — ” In those days came John the Baptist preaching in the wilderness.” The architect is Mr. Frederick Rogers, of 9, Serlo-street, Lincoln’s Inn, W.C.”