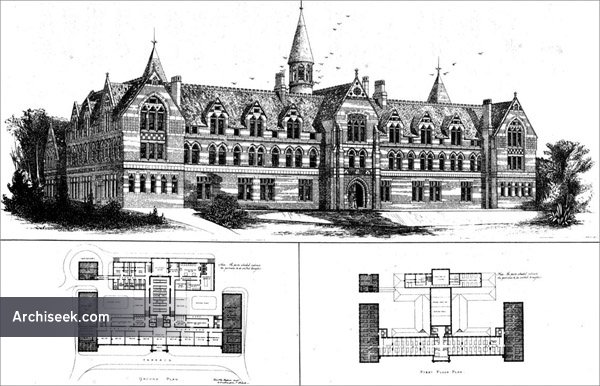 Later known as Milton Mount College For Girls in Gravesend. The College was founded in 1871 by the Rev. William Guest, pastor of the Congregational chapel at Gravesend, as a Boarding School for the daughters of Congregational ministers. The classrooms were on the ground floor and the upper floors were divided into sleeping cubicles. In March 1918 the Admiralty requisitioned the school as a Hospital for Venereal Diseases. Although the Admiralty did not stay there long the moral stigma made it impossible for the girls to return after the War. The College never returned but moved location, and claimed compensation from the War Office. In 1921, it was sold for an orphan school run by Roman Catholic educational authorities and opened by the Roman Catholic Bishop of Southwark in 1926 and continued as part of the Southwark Rescue Society. Demolished in 1972. Perspective View with Plans published in The Building News, September 29th 1871.