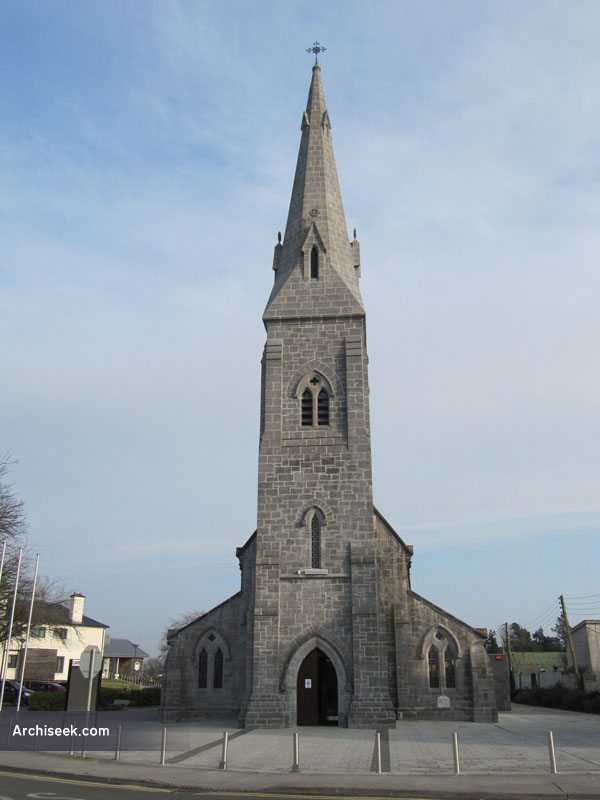 Earlier church with new front, spire, and aisles added in 1860-62 by J.J. McCarthy. Dedicated in 1862, the internal work was finally completed by 1868. The interior was renovated in 2010 with new altars and fittings as well as heating. The original interior fittings were largely removed following a reordering in 1970. 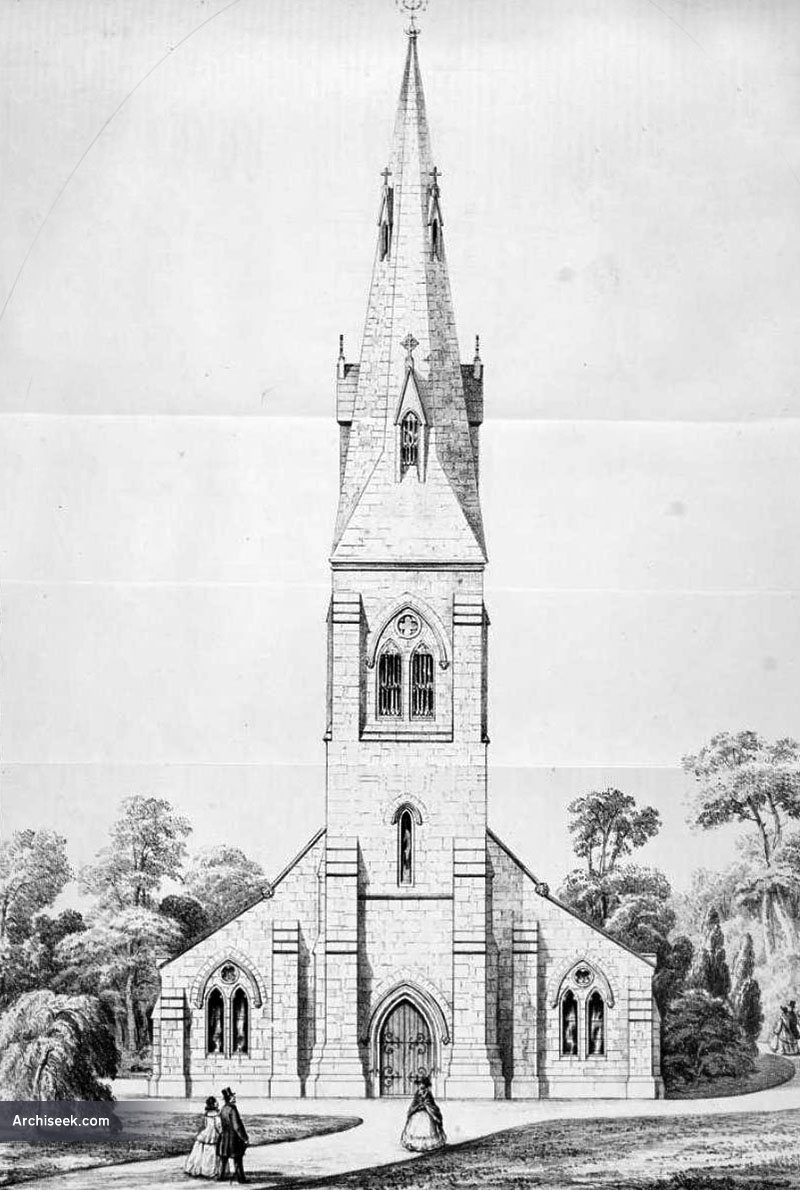 “OUR illustration represents the new front with tower and spire and side aisles added to the existing church, after designs by Mr J.J. McCarthy, architect. Much praise is due to the Rev Joseph Flood for his exertions in maturing this architectural work under the usual difficulties which beset such projects intended, will comprise nave 92 by 23 feet, aisles 8 feet 3 inches wide, sacristy, and tower at west end as shown on illustration. The nave is the original structure and the aisles are new. The spire rises to a height of about 116 feet. The walls are of rubble masonry and the dressings of limestone.” The Dublin Builder.

“This building is steadily advancing towards completion. Wonderful progress has been made; all the aisles, both at the northern and southern sides, are completed, their elegant and compact limestone pillars are finished, a beautiful encaustic pavement has been laid down in the sanctuary, some of the stained glass windows put up, and a great variety of details supplied in a style fully in keeping with the just pretensions of the whole building. The style of architecture is the Early English Gothic, and all the works have, it is said, been executed in a substantial and superior style by the contractor, Mr John Molloy, of Tullamore.

Five arches at each side, springing from polished limestone pillars, separate the nave from the aisles, and above these arches are as many two-light lancet windows. The sanctuary is lighted by three window, and the ceiling is groined in plaster work of a tasteful design. At the Gospel side of the sanctuary there has been erected a small lady chapel, furnished with a richly designed stained glass window. In the southern aisle there are two stained glass windows, one representing the Delivery of the Scapular to St. Simon Stock by the Blessed Virgin, and the other representing St. John of the Cross. The tower is a massive and elegant building, the summit of which is reached by a stone spiral staircase. It is proposed to erect on this tower a spire surmounted with a mediaeval cross, which will be 126 feet from the ground.

Although a considerable amount of work remains to be done, which will, of course, involve considerable expense, the appearance of the church is already very imposing, and well calculated to excite the admiration of the beholder. The interior fittings and decorations are as complete as possible, and in addition to all that has been described as accomplished, a superb altar and tabernacle of Caen stone are being erected in the medifeval style. An organ of much power and remarkable sweetness of tone, built by White, of Bishop-street, in this city, has just been put up,and has been inaugurated.” The Dublin Builder, April 15 1863