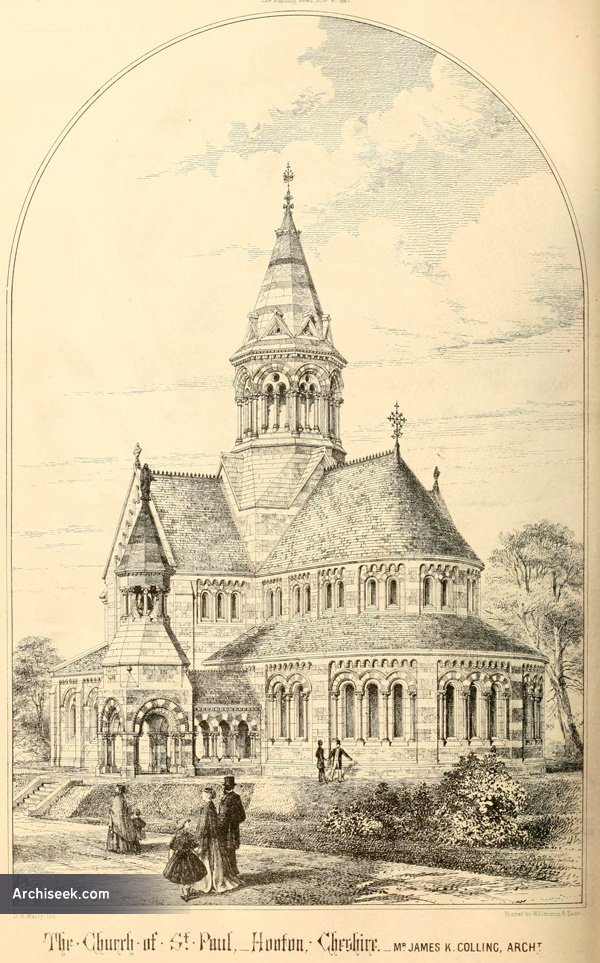 From The Building News: “THE church of St. Paul, Hooton, Cheshire, of which we give exterior and interior views this week, has been lately erected and endowed at the sole expense of Richard Christopher Naylor, Esq., of Hooton-hall, and it is situated just within the lodge gates of the Chester entrance to Hooton- park, midway between the villages of Sutton and Thornton. The form is that of a cross with short transepts and a semicircular ambulatory at the east end, the intersection of the cross being surmounted by a stone dome and pendentives supporting a lantern which is open inside to the church. The arcade of the lantern is filled in with single sheets of plate glass, giving externally the lightness and appearance of an open lantern. The walls throughout, externally and internally, are wholly of stone. Externally the plain portions are of the red sandstone, hammer dressed, from Eastham Ferry, a quarry not far from the church, and upon Mr. Naylor’s property. The bands and dressings are of the white sandstone from Stourton, near Birkenhead. Internally the stone is reversed, the walls and plain portions, as well as the carving, being of the white sandstone, the occasional bands and the alternate voussoirs of the arches being of the red sandstone. The pillars supporting the arches of the nave and chancel are of red polished Peterhead granite. The roof, which is of very solid construction although simple, is of pitch pine. The seating of the nave and aisles also is of pitch pine, selected with great care for its beauty of grain, and forms a very excellent example of seating in this very beautiful wood, and does great credit to the builders of the church. The seating and stalls in the chancel, as well as the open arched screens separating the ambulatory from the chancel, are of oak. The capitals and corbels of the nave and chancel, which are very well carved, having birds, &c., intermingled with the foliage, which is conventionalized from nature, were executed by the late Mr. Edwin Stirling, of Liverpool.

On the south side of the chancel, separated from the church by a short open cloister, having coupled shafts of polished red granite, is the bell turret, which also forms a private entrance to the hall. The spire of the turret is surmounted by a statue of St. Paul, also the work of the late Mr. Edwin Stirling. Beneath the cloister is a family vault for interment. The west entrance has an open porch with polished red granite and Cornish serpentine shafts and carved capitals. The tympanum over the doorway is filled In with elegant foliage and the words *’ Enter into his gates with thanksgiving.”

The pulpit is executed in Caen stone with red sandstone diapered pedestal and angle shafts of Devonshire marble, having carved panels on the sides containing the monogram of St. Paul, the Greek monogram, &c., and was the work of Mr. T. Phyfifers, of London. The font is of serpentine marble, and is the one which was exhibited by the Serpentine Marble Company at the Inter- national Exhibition, 1851. The east and west windows, the latter being a wheel window, are filled with stained glass by Messrs. Clayton and Bell, of London. The pavement of the nave, aisles, chancel, and ambulatory are of Minton’a tiles laid in geometrical patterns. The church contains about 300 sittings. The total cost of the church was about £7,000. The architect was Mr. James K. Colling ; and the builders, Messrs. Holme and Nicol, of Liverpool.

A new parsonage has just been completed near the church, which has been erected from designs by the same architect. It is of simple and unpretending appearance, being of brick with bands in the blue Staffordshire brick and a few red stone dressings. The total cost, including stables, was about £1,600. The builder was Mr. Petei Hodgkinson, of Sandbacb, Cheshire.