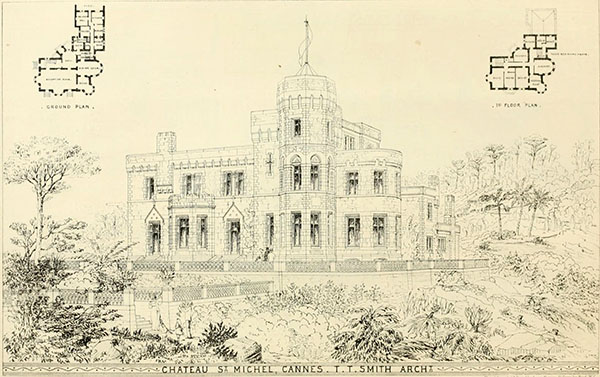 “Built two miles on the east side of Cannes, on the road towards Golfe Yuan, is situated on an eminence overlooking the Mediterranean, and commanding extensive views over the Estrelle on the one side, and Nice on the other. It is erected in granite quarried on the spot, with dressings of white .stone from Aries, the whole lined with brick. The roof is constructed with rolled iron joists 3ft. apart, hollow brick arches between, over which is a layer of concrete and an asphalt flat, the ceiling joists below being kept a few inches under the iron work, forming an air space between. The total cost of the building, exclusive of terraces, was £4,200. The work was designed and carried out under the superintendence of Mr. T.T. Smith, architect, 33, Bloomsbury-square.”: Published in The Building News, December 1, 1874.

Constructed for Ince Anderton, an Englishman. The neo-Gothic castle had two floors and was decorated with two crenellated towers. Demolished in late 1950s.