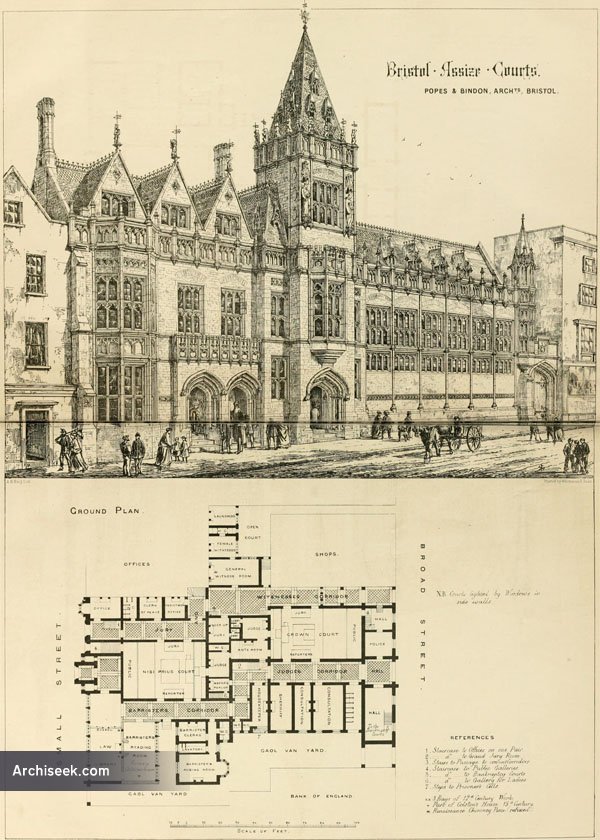 The assize courts were attached to the rear of the Guildhall between 1867-70, by TS Pope and J Bindon. Constructed after a contentious architectural competition, it is a Grade II* listed building.

From The Building News: “These buildings are being erected between Broad and Small- streets, and are the result of a competition last year from advertisements in the public papers sent in to the corporation under motto. Mr. G. E. Street was requested by the corporation to visit Bristol, and adjudicate on the design. Fourteen designs were sent in by competing architects, and Mr. Street’s decision was that Popes and Bindon should receive the first premium of 100 guineas ; Godwin and Crisp, the second premium of 50 guineas ; and Messrs. Hansom and Sons, the third premium of 25 guineas. The corporation confirmed Mr. Street’s decision, and appointed Popes and Bindon, of Bristol, to proceed with the working drawings and obtain contracts. (If those delivered, that of Messrs. Wilkins and Son (just under £12,000) was accepted, this amount not exceeding 10 percent, of the architects’ estimate. The design is being carried out in the style of Colston’s House, a portion of which is utilized and forms rooms for consultation rooms, law library, and barristers’ reading rooms. The old remains comprise a variety of styles, including Norman, Early English, Perpendicular, and Renaissance. The Crown Court ia 54ft. by 30ft., and the Nisi Prius 50ft. by 31ft, and each 36ft. high, both lighted by side windows with ornamented roofs. “The courts are approached by corridors on each side. From one corridor is the entrance for judges, barristers, and attorneys, and the other corridor for witnesses and jurymen, with the necessary rooms for each attached to the corridors, and the corridors are connected, under the judges’ platform, by descending a few steps to a cross corridor. The grand jury and other rooms are placed on the one pair, with access to galleries in courts. The elevations are being executed in Box ground freestone and red Mansfield stone. The interior architecture is being executed to accord in every particular with the exterior.”