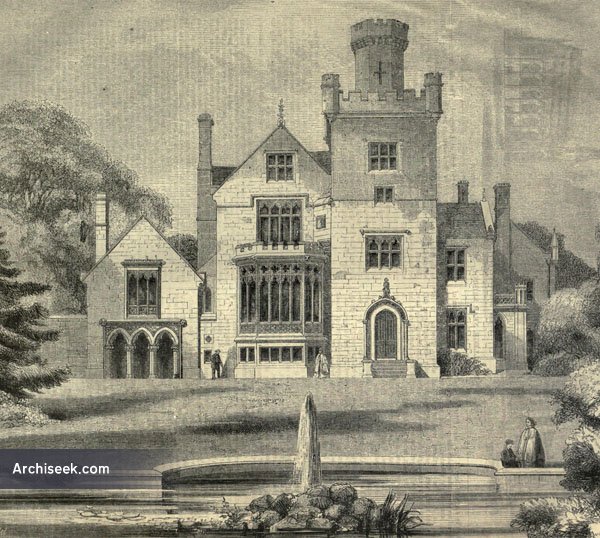 From The Building News: “THIS Priory, an illustration of which was given in our last, is mentioned in the reign of Edward the Confessor, and was granted by Edward IV. to Henry’, Duke of Suffolk, afterwards to Sir John Bentley ; in 1799 Erasmus Darwin, afterwards Sir Francis Darwin, at whose death it was offered for sale and purchased by Francis Morley, Esq., for whom the following alterations and additions have been made. The entrance-hall, which was very narrow, has been enlarged by taking away a large portion of the centre tower in which was formerly a winding staircase, the walls being nearly 3 feet in thickness, and supported upim trussed beams of wrought-iron and wood; the entrance-hall now measures 21 feet square, and is floored with solid parquet flooring ; the principal staircase is carved oak. ‘The back hall and staircase are lighted by a three-lignt traceried window, filled in with stained glass.

A new dining-room, 30 feet by 20 feet, exclusive of the bay window, is added to the east side, with office, lavatory, and watercloset, and a suit of bed-rooms over, with bath-room, lavatory, and’ water-closet. There are two bath-rooms, one at the east, the ‘other at” the south end of the building, and hot and cold water can be drawn at several parts, both up and down stairs.

The entire of the east front is cased with new stone, with porch-entrance. The library and all the windows in south and east fronts are new. The morning- room doorway is also new. The only old part ha the south front is the tower to the square below the moulding supporting the battlements, which was originally gabled. The height of the tower is 70 feet, from which Lichfield Cathedral may be seen on a clear day. The smoking-room is the upper room of the tower. The drawing-room is 30 feet by 19 feet, exclusive of the bay window which is seen in the south view, and is highly decorated.

The billiard-room is 24 feet by 18 feet, it has an open carved roof lighted by skylights and counter light, which is fixed about 5 feet below the ridge, and is glazed with ground glass, the room is finished in the Moorish style ; it has also a three-light traceried window in the south front. A watercloset and lavatory is provided. Underneath is the servants’ hall, 18 feet by 18 feet, and the arcade 18 feet by 5 feet ; the kitchen, laundry, &c., have all been remodelled. The stone has been quarried on the estate, and from the same quarry the original building was erected. The basin for the ornamental water, which has an area of 15,000 feet, is enclosed by a stone wall and moulded coping, which with tlie laying out of the grounds, will cost about £4,000. This is exclusive of the lodge, entrance gates and farm building, which will cost about £1,800 more.

Mr. J. W. Thompson, of Exeter-street, Derby, was the contractor for the building, and Messrs. Ward and Co., of Manchester, were the plasterers and decorators. It is but right to add here that it was the Messrs. Arrowsmith, of New Bond-street, who laid the hall with the solid parquet flooring— the centre being of oak and walnut interlaced, with an ornamental border of elaborate design. The dining-room is also laid with a handsome border, 2 feet 3 inches in width. The whole has been done from the designs and under the superintendence of Mr. Robert Scrivener, of Hanley, architect.”

Now further extended, circa 1900, in a style similar to Scrivener’s work and a countryhouse hotel.